On Tuesday 3rd March 2009 Martijn and I took the train from Glasgow Queen Street to Falkirk Grahamston to pay our first ever visit to the Falkirk Stadium. As I had planned to visit all SPL stadiums during the 2008/09 season, £12 tickets to see Falkirk play Dundee United was too good an offer to miss out on. The £12 tickets were for the East Stand which is a temporary stand with a canvas roof. The stand is not much to look at but it was the stand the best pictures could be taken from.

After a 45-minute train journey we arrived in Falkirk. As this was an evening fixture on a normal working-day there was no time to visit any pubs for a pre-match refreshment (not that we saw any) so we headed straight for the ground. Tonight we had typical Scottish weather again, i.e. torrential rain throughout the night. We arrived at the stadium soaking wet but it was even worse when we took the 25-minute walk back to the station. During the game we stayed dry despite a few leaks in the canvas roof above us.

The game was not that exciting, the only goal coming from a first-half United penalty but for £12 I could not really complain. I would like to come back here on a sunnier day when the South Stand is finished, possibly when the Bairns are playing St Mirren. 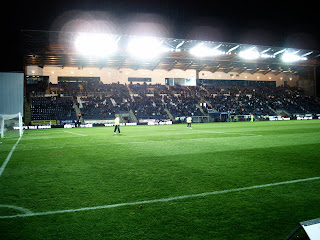 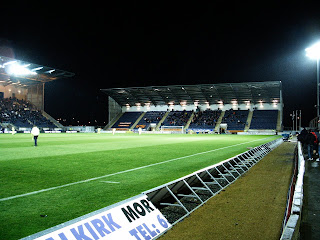 The North Stand which housed the Dundee United fans. 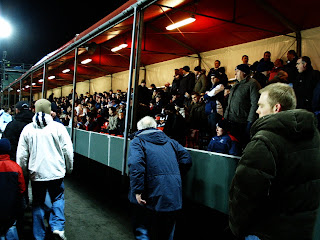 The East Stand, which is just a temporary stand with a canvas roof. 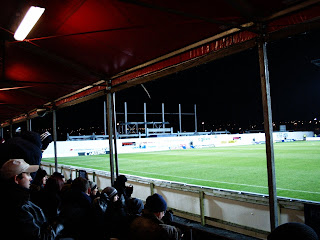 The South Stand which is almost finished now (see recent photos here) but they had just started work on it when we visited the ground. 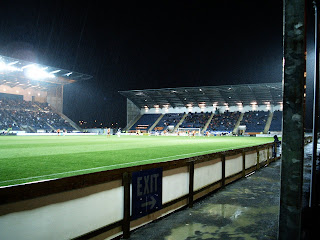 This picture clearly shows the appalling weather conditions in which this game was played.