In 1998, when I was studying to become a teacher of English in the Netherlands, I got the chance to spend three months in Leicester as part of the ERASMUS programme. I followed a few courses at the Faculty of Humanities at De Montfort University together with two fellow students from my college in Sittard in the Netherlands. We stayed at William Rowlett Halls of Residence which were only a 5 to 10 minute walk to Leicester City's Filbert Street stadium. Incidently both the halls and the stadium no longer exist. Apparently the halls were demolished after a fire a few years ago and Filbert Street was torn down after City's move to the Walkers Stadium in 2002.

Leicester City were a successful club in 1998. Martin O'Neil had taken them to the Pemiership in 1996 and they had won the Coca-Cola Cup in 1997. The squad included players like Matt Elliott, Robbie Savage, Neil Lennon, Emile Heskey and Muzzy Izzet. As a result of their successes tickets were difficult to obtain with most games at the 22,000 capacity ground a sell-out. Eventually I managed to get a ticket for the game against struggling Barnsley on the two-tier South Stand with a restricted view. Three weeks after my visit to Anfield I saw my second Premiership game. The Foxes' 1-0 win over Barnsley meant that relegation was confirmed for the men from Yorkshire after only one season in the top tier of English football. 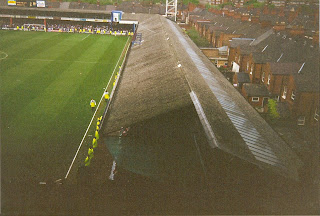 The Popular Side which also housed the away fans. Part of the roof had been removed, presumably to avoid obstructing the view from the lower tier in the South Stand. 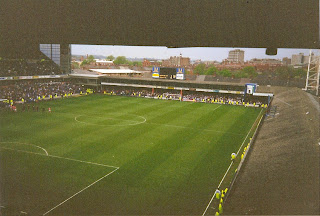 The Filbert Street End, an odd-looking stand with its 20 executive boxes and scoreboard on the roof. The De Montfort University buildings can be seen in the background. 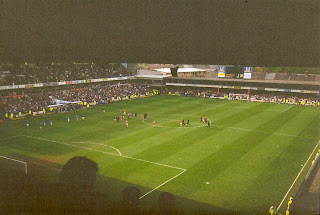 On the left the two-tier Carling Stand, which was opened in 1994, only eight years before the stadium was demolished.