For pictures of the 2010 Co-operative Insurance Cup semi-final at Fir Park click here.

On Saturday 18th April Martijn and I took the train to Motherwell to see the Steelmen take on St Mirren. There was a special offer today, only £5 to attend an SPL game in a ground I had not visited yet could not be snubbed. This was an important game for both Motherwell and the Saints however more so for the Paisley club as they had dropped down the table in the last few weeks and relegation was a serious threat. Motherwell needed a win to secure a top-six finish in the SPL. Both teams were not playing well and the 2-0 win was a flattering result for the Buddies however nobody in the away end, where we were seated, seemed to mind. 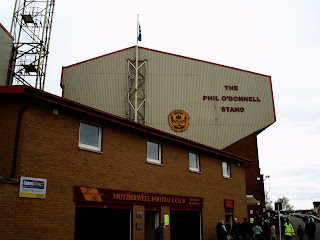 The Phil O'Donnell Stand (previously called the Main Stand) seen from the outside. The stand is of course named after the Motherwell player who so tragically died on the pitch during the home game against Dundee United on 29th December 2007. 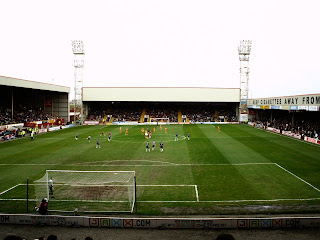 A view on the Davie Cooper Stand from the away end. The two-tier away end is probably the most impressive of the four stands but unfortunately I was not able to take a good picture of it. 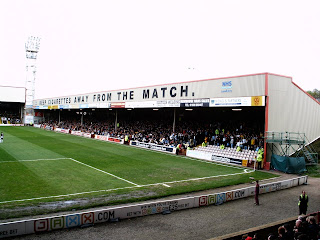 The East Stand with the famous 'Keep cigarettes away from the match' NHS advertising. 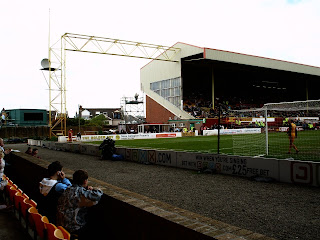 The Phil O'Donnell Stand does not cover the entire length of the pitch but the steel construction that supports it does. The Scottish Football Ground Guide gives this explanation: 'According to Simon Inglis in his book 'The Football Grounds Of Great Britain', this was because it was originally intended in 1962 to build a full length stand but due to a dispute with a an owner of a house beyond the corner of that ground (a dispute which the club lost) it was never completed as intended.' 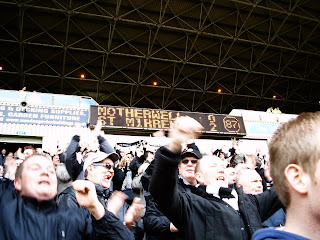 Andy Dorman scored the second Saints goals only three minutes before time to the delight of the large travelling contingent on the South Stand. Note the score board, a rare feature in SPL grounds. Until 2005 the SPL required their clubs to have stadiums with a capacity of at least 10,000 but they apparently do not care about such simple features as a score board. 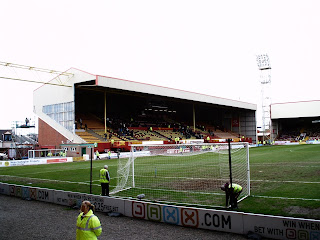 Another view of the Phil O'Donnell Stand after the final whistle. 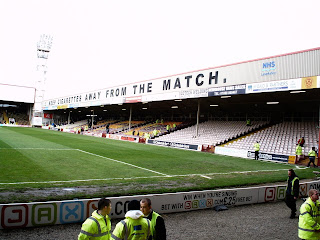 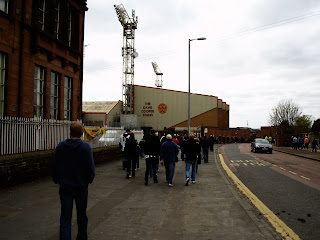 The Davie Cooper Stand seen from the outside. 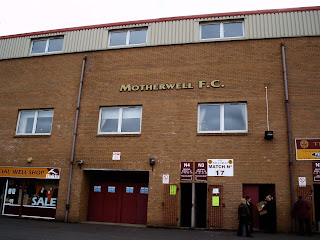 The club shop and ticket office.