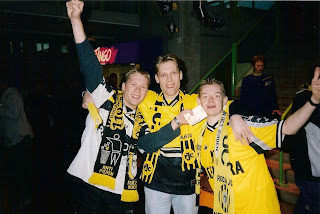 Getting ready for the Dutch FA Cup semi-final against Vitesse. 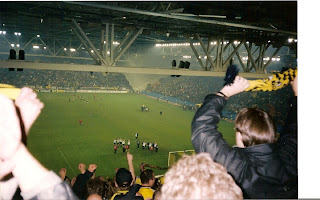 Roda won 1-0 after extra time when Dave Zafarin scored the 'golden goal' after 105 minutes which mean we qualified for the final once more.

However this was not my first visit to the Gelredome. That was for a league game in 1998, only a few months after the Gelredome had opened its doors, if not its retractable roof. Roda lost the game by one goal, scored by goal sensation Nikos Machlas.

At the time I had not visited many away games but one of my mates who used to go to the home games with us went to college in Arnhem at the time and his digs were only about 15 minutes from the new stadium. I remember some nutter taking my scarf and running off with it in a particularly cowardly move and two guys following the three of us when we were walking back to my mate's house dressed in club colours (minus the scarf of course) throwing pebbles in our direction. The joys of away days in Holland.