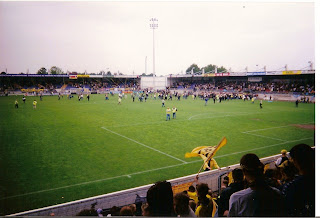 Pitch invasion after RKC Waalwijk v Roda JC (4-1).
Had Roda won they would have finished the league in 3rd place, meaning Champions League qualifiers. It started off well with Bob Peeters scoring for Roda after only 14 minutes but it was not to be. Roda finished in 5th place and we 'only' managed to qualify for the UEFA Cup. How I long for those days!

Like all of the other older pictures on this site I had to scan this one hastily at my parents' when I was over for a weekend because I do not own a scanner myself. I do however have more pictures of this trip and I am hoping to put them on the site on a later date.