For other pictures of New Douglas Park see this post.
On Saturday 20th December Martijn and I got on a train with destination Hamilton West to visit the Lanarkshire derby between Hamilton Academical and Motherwell. Hamilton had only been promoted last season and were plying their trade in the top tier for the first time in 19 years. I thought this would be a fiercely contested battle but how wrong I was. Only 3,527 fans showed up to see this game which was probably also due to the fact that this game was all-ticket. 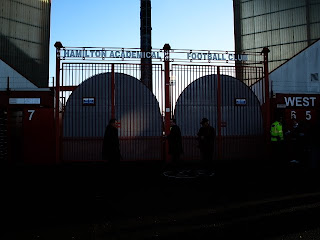 This was my second trip to Hamilton in five days as I had to purchase the tickets at the ticket office at New Douglas Park. I had phoned the club to enquire about availability, fearing this might become a sell-out when I was told that they could not accept credit card bookings because the bank, either the Bank of Scotland or the Royal Bank, would not let the club accept credit card payments since they got into financial trouble a few years ago. As it happened I had a day off on the Tuesday before the game so I went to Hamilton just to get a couple of tickets. To be honest it is easy to travel to from Glasgow Central, about 20 minutes on the train, and the ground is a ten-minute walk from Hamilton West station. 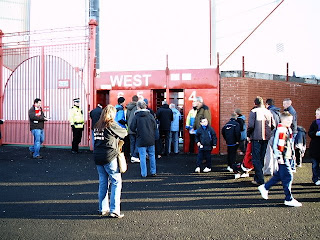 The game was quite disappointing. Motherwell fans chanting 'We hate Airdrie more than you' was an indication that this was not going to be the intense derby I had hoped for. One who did not disappoint was Hamilton's 18-year-old gem James McCarthy who scored both goals.

The ground was not very impressive either. Only two proper stands, The North Stand (or Spice of Life Stand) and the Main Stand (or Reid Furniture Stand) give the impression that the stadium is still under construction but last season's attendance figures do not suggest that further development is required. This seems to be something typical of Scottish football. Rather than building a complete stadium with the required capacity some clubs insist on building individual stands that are much too big and you end up with a half-built stadium, see also Falkirk. Despite all the criticism it gets I think a ground like New St Mirren Park is a much better solution and provides a better atmosphere as well. 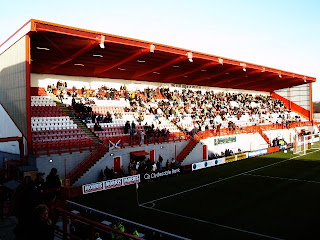 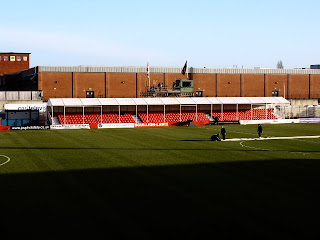 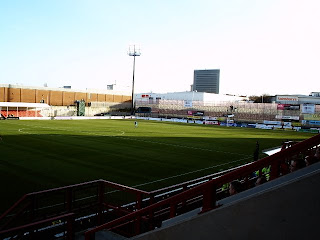 No stand (yet?) at the southern end of the ground. 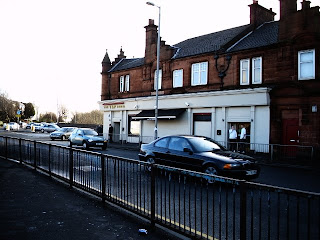 We had started off our visit to Hamilton with a couple of pints in The Tap Room near Hamilton West station.