On Saturday 23rd May 2009 Murrayfield Stadium staged the final of the biggest club competion in world rugby for the second time, only four years after Toulouse lifted their third Heineken Cup at Murrayfield. Since 2005 the competion had grown even bigger and had seen three sold-out finals in Cardiff, Twickenham, and again Cardiff. Before it was even known what teams were going to compete in the final the public allocation of 45,000 was already sold out. I had bought my tickets the previous summer as I did not want to miss out on this after I had attended the 2005 final and because I wanted to make sure I would get the cheapest tickets, £10 dearer than the last Edinburgh final but still excellent value at £25. 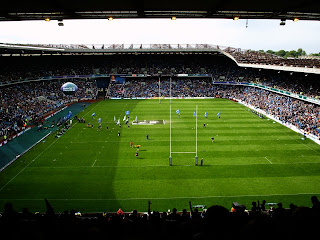 The teams who were in the final, Leinster of Dublin and Leicester Tigers, were attractive sides and I was looking forward to this one. Because of the time I had spent in Leicester I was supporting the Tigers today. The Irish fans outnumbered their English counterparts and were much more vocal. The game itself was another tight affair, just like in 2005, however this time no extra time was required. Eventually Leinster won deservedly 19-16 and lifted the Heineken Cup for the first time, the third Irish side to do so after Ulster in 1999 and Munster in 2006 and 2008.

Another successful final was staged at Murrayfield but surely many Scottish supporters who were attending must have had mixed feelings. When will either Glasgow or Edinburgh appear on this stage? Edinburgh finished in second place in the Magners League, three points above finalists Leinster but still their best performance in the Heineken Cup is a single quarter-final appearance in 2004. This is a grim statistic and Glasgow's record in the competion is even worse. And even if Glasgow or Edinburgh were to reach a European final how many supporters would they take to Dublin or Paris, or even Cardiff or Twickenham? It is hard to imagine the same numbers that followed Munster and Leinster turning out for either Glasgow or Edinburgh in the near future no matter what the occasion. 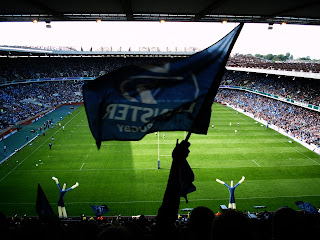 The Leinster fans outnumbered and outsong the supporters of England's most popular rugby club. 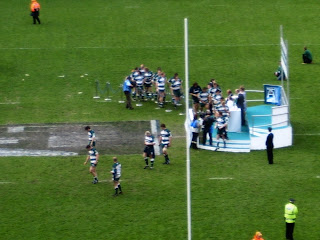 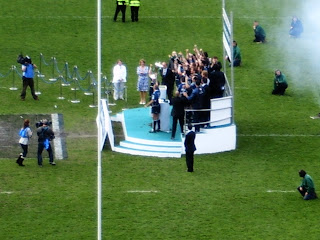 These guys looked a lot happier. 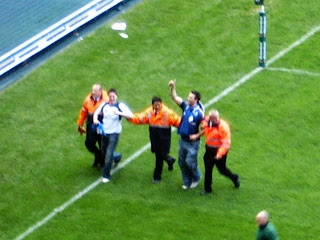 Unlike 2005 there is now a zero-tolerance policy towards pitch invaders at Murrayfield. 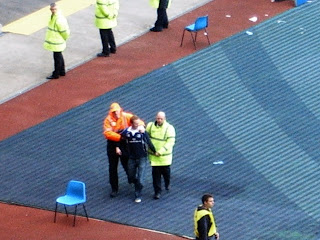 Of course people still try to make it on the pitch, probably after having consumed too much of the main sponsor's most popular product... 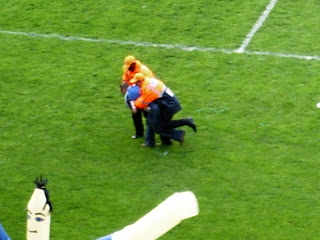 ...which led to amusing scenes for the rest of us.