Newly-crowned Scottish champions Rangers were taking on Falkirk in the final of the Homecoming Scottish Cup. Falkirk had only barely avoided relegation by beating Inverness at the Caledonian Stadium so Rangers were odds-on favourites to win the double. 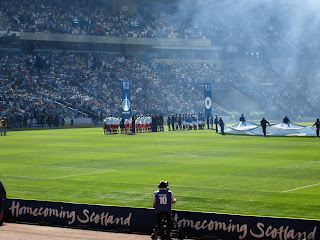 Although St Mirren had lost the semi-final of the Scottish Cup to Rangers I was not going to miss out on the final so I cheated: I went as a Falkirk supporter. It was a lovely warm day at Hampden and days like this do not come along very often at the national stadium, at least not when I am there. The game was good too, surprisingly good. I had not expected this after the disappointing semi-final. There did not seem to be much belief amongst the Falkirk contingent that the Bairns were capable of winning their first Scottish Cup since 1957 however this had not rubbed off on the players.

During many spells of the game the boys from Falkirk were the better team however they were not able to find the net. That is not something you can say about Nacho Novo: he came on as a substitute and scored the winning goal seconds after. It turned out to be a beauty when I saw it on the telly later that night because I had missed it: I was waiting in the ridiculously long queue at the food stand.

Falkirk never gave up but they were not able to pull one back so Rangers completed a league and cup double to the delight of their supporters. 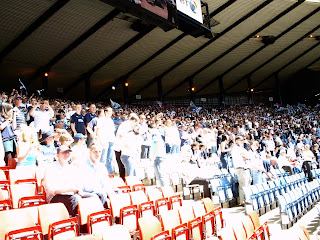 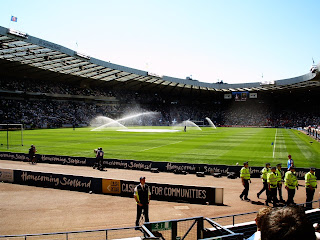 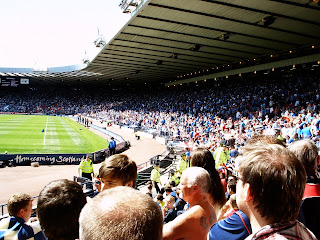 The Rangers fans outnumbered the Bairns fans about 3 to 1. 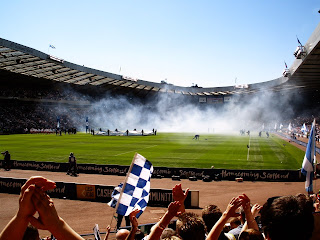 The players coming onto the pitch. 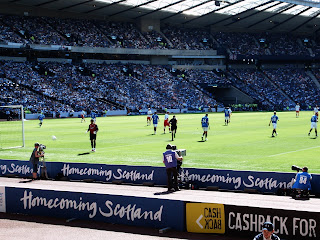 Falkirk gave Rangers a good game but were unable to find the net. 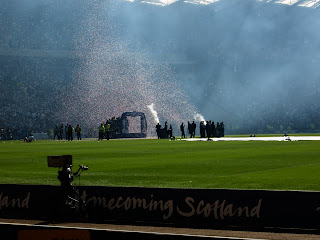