On 18th July I married my beautiful Gail and we headed for Benidorm on Tuesday 21st July for our honeymoon. Although groundhopping was obviously not my priority during our holiday I still managed to get a few shots of some grounds in Benidorm, Alicante, and Valencia.

On Wednesday 22nd July Gail and I walked to the ground which is on the edge of the town, in an area where you do not find many tourists, which is of course quite unusual in Benidorm. Benidorm Club Deportivo play in Segunda Division B, the third tier in Spanish football. According to Wikipedia the ground has a capacity of either 6,000 or 9,000 (both numbers are given) of which 500 are seats. As with most grounds in these parts all stands are uncovered and the stadium is not much to look at from the outside. I have no idea what the atmosphere on match days is like and what kind of attendance figures Benidorm CD have.

When we arrived at the ground the groundsmen were watering the pitch and a gate was open so I could take a few pictures. The pictures on the official website of Benidorm CD give a good impression as well, unfortunately again no match day photographs. Bruce Springsteen gave a concert here when we were in Benidorm, surely this must be one of the smaller venues of his current tour. 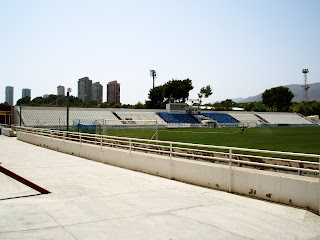 The Main Stand (or at least that is what I call it). 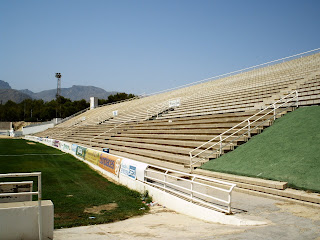 The terrace opposite the main stand. 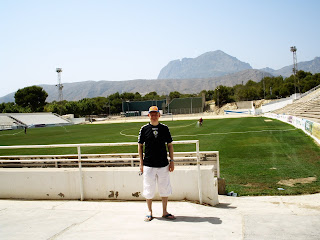 I was happy I was able to get inside the ground. 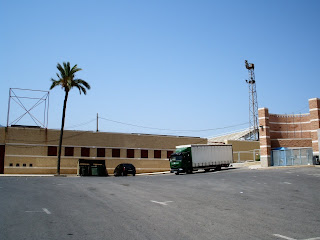 The ground is not much to look at from the outside although the palm tree is a nice touch.
Posted by Bas at 19:37