On Thursday 30th July, during the second week of our honeymoon, Gail and I visited the city of Valencia, the third city in Spain after Madrid and Barcelona. We went for an excursion combined with tickets for the Bus Turistic, one of these open-top doubledecker buses you will find in many popular cities across the world. A very 'touristy' thing to do but great if you want to see as much of a city as possible in only a few hours.

Before going on holiday I had done a bit of research and decided I wanted to see three grounds in Valencia. First of all the Estadi Ciutat de València, home of Levante UD, Valencia's 'other' club. Then there was of course the Mestalla, home of Valencia CF, one of Spain's biggest clubs outside the Big Two, if not the biggest. Finally I planned to see the Nou Mestalla, Valencia CF's new state of the art 75,000 capacity ground which is still under construction. 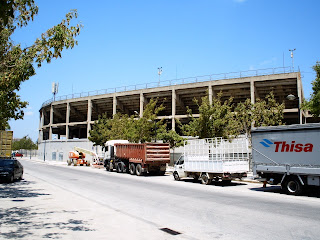 A lot of construction work is currently done outside the Estadi Ciutat.

Unfortunately the Estadi Ciutat was not anywhere near any of the stops of the Bus Turistic. So first there was a walk of about 2 miles to the home of Levante UD. The Estadi Ciutat de València (which is the official name in Valencian, the Spanish name is Estadio Ciudad de Valencia) is an all-seater ground with a capacity of 25,354 according to the Spanish Wikipedia entry. Levante Unión Deportiva (or Llevant Unió Esportiva in Valencian) was founded in 1909, ten years before local rivals Valencia CF. Although they played in the Primera Division for three seasons in this century they have played in one of the lower divisions for most of their existence, always playing second fiddle to their big brothers, much more so than Espanyol or Atletico Madrid. Levante's only major trophy was the 1937 Copa del Rey. 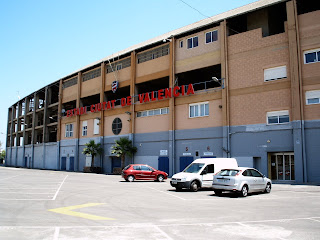 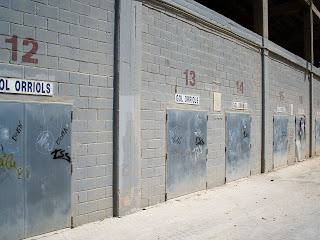 Unfortunately no open gates to be found this time. I could not even get a glimpse of the pitch. 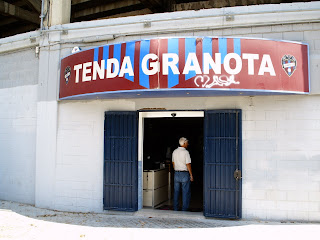 The club shop however was open. We arrived at the ground just before siesta started at 2pm. Apparently 'Tenda Granota' means 'Frog Shop', as Levante UD are known as the 'Frogs' (see reader comment below). 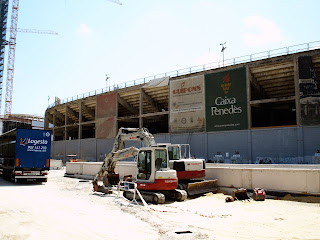 I had already seen there was a lot of construction work going on when I 'visited' the ground on Google Street View but I had hoped it would all be finished by now. 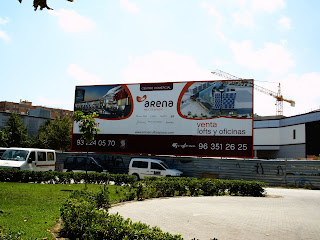 This is what it is supposed to look like after all the work is finished.

After the Estadi Ciutat it was off to the Mestalla, another two-mile walk in the afternoon heat. There was no scale indication on the map I was using and I did not think it was as far as that so I told the missus it would be a 15-minute walk, which was an honest estimate if not a very good one. After a prolonged '15 minutes' we arrived at the Estadio Mestalla, home of Valencia Club de Fútbol.
Built in 1923, the ground was one of the venues for the 1982 World Cup and the host nation played all of their three group games in Valencia. The Spanish Wikipedia entry gives a current capacity of 52,600. 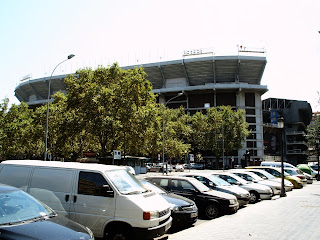 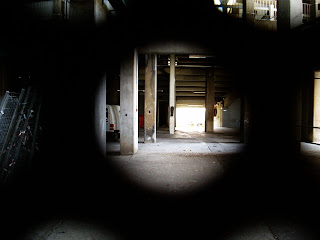 Unfortunately, again no open gates. In fact the ground looked totally deserted with no sign of life. This was as close as I got to a pitch view. 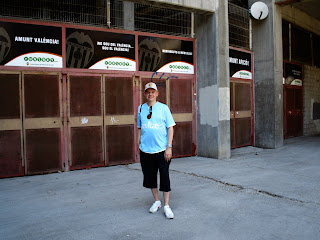 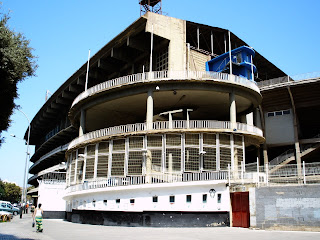 An impressive ground from the outside. A shame I could not get inside! 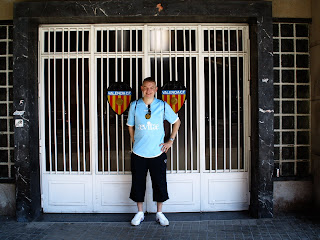 At the main entrance.

After this slightly disappointing visit it was off to the Nou Mestalla. To see this ground, which is still very much under construction, we jumped on the Bus Turistic again, about a mile away from the Mestalla. Luckily the bus would not only drive past the new Valencia ground, it would even stop nearby. Unfortunately there was not enough time for us to get off so I had to take my pictures from the bus.

Expectations were not very high as the pictures I had seen on the internet showed that the construction work had been delayed. Valencia CF are in deep financial trouble and all construction work on the stadium has been halted. It turned out there was still a lot of work to be done before its opening, which is now scheduled for February 2011. I am not sure what this estimate is based on as the pictures show there is absolutely nothing being done at the moment, no cranes, nothing. However you can really imagine this being a word-class ground if it ever gets finished. See this site for more pictures and concept art. 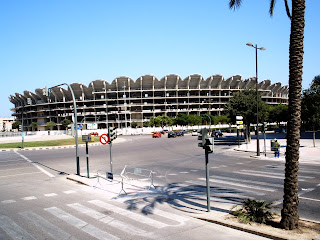 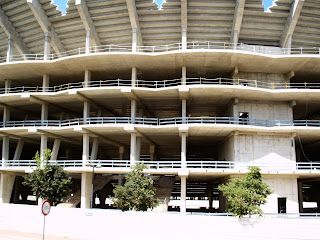