Today it was off to Dumbarton, home of Dumbarton FC, who were Scottish Champions, in 1891 and 1892, although the 1891 title was shared with Rangers. Of course Dumbarton have not been as successful as that for quite a while although the Sons won the Scottish Third Division last year. The 'Sons' is a bit of a peculiar nickname but then again most nicknames are when you think of it. Apparently it is derived from the phrase 'Sons of the Rock' a term used for those born in the town of Dumbarton. The 'Rock' obviously refers to Dumbarton Rock, which is hard to miss when you are in Dumbarton. It is a 25-minute train journey from Glasgow Queen Street to Dumbarton East and from there it is only a five-minute walk. 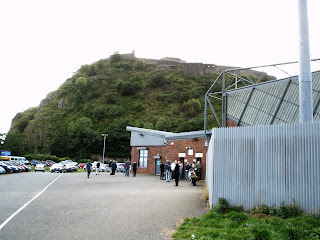 Approaching the 'Strathclyde Homes Stadium' turnstiles with Dumbarton Rock in the background.

Dumbarton play their home games in the 'Strathclyde Homes Stadium', which is probably the worst name in Scottish League football at the moment. The stadium opened its doors in 2000 and replaced Dumbarton's traditional home, Boghead Park. There is only one stand with a capacity of 2,025, but the spectacular location still makes this an attractive destination for groundhoppers, even though it is a bit tricky to photograph the complete stand with Dumbarton Rock in the background. 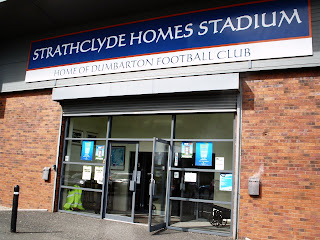 Today's opponents were Clyde, who were relegated from the First Division last season. Alan Lithgow scored the first two goals to give the Bully Wee a 2-0 lead after 24 minutes. However from the moment Clyde goalie Calum Reidford was sent off (for an attempted head-butt on Roddy Hunter) the Cumbernauld team started to struggle and Mick Dunlop pulled one back for the Sons just before the half-time whistle. Roddy Hunter scored the equaliser in the second half but it did not take long for Clyde to restore their lead as trialist Willie McLachlan scored from a beautifully taken free kick. Iain Chisholm scored the 3-3 only minutes before the final whistle and Dumbarton had a great chance to win it as well however this thriller did not deserve a losing team and 3-3 was the final score. 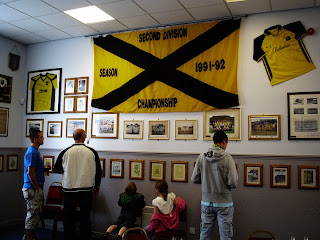 I have said it before, a stadium with a bar can never be a bad ground. There were loads of memorabilia on display as well. 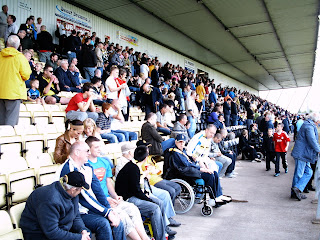 A healthy crowd of 975 turned up for this Second Division game. 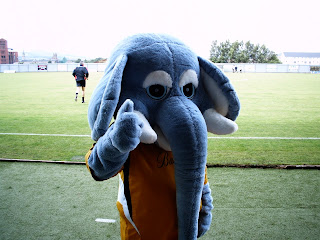 'Pellie' was happy to pose for a picture. 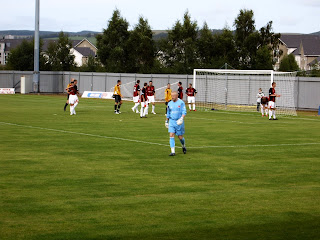 The Clyde goalie was sent off after 35 minutes. 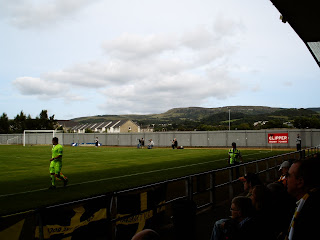 Only one stand but some great views. 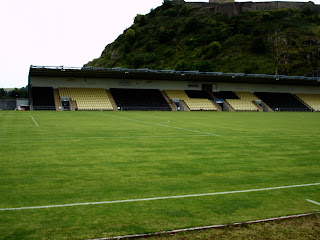 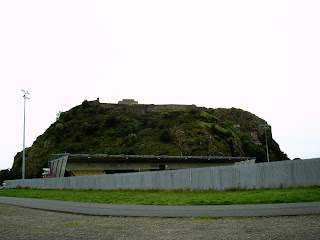 Another view from outside, I could not get enough of it!