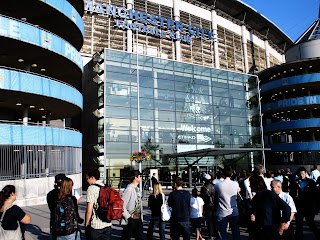 Today Martijn and I took the train to Manchester and I paid my second visit to the City of Manchester Stadium. City were playing Arsenal, the same fixture I attended last season. And just like last season the Gunners were well beaten. Unlike last year however, today's game was a sell-out and City were looking to extend their perfect start to this Premier League season.

The first City goal was a lucky one, Emanuel Malinia headed into his own net, but the Blues managed to go into half-time with a 1-0 lead. The second half was more spectacular. Robin van Persie equalised in the second half but twelve minutes later Craig Bellamy ensured the Citizens were in the lead again.

After scoring the third City goal former Gunner Emmanuel Adebayor sprinted all the way to the other end of the pitch to celebrate in front of the Arsenal fans which of course did not go down well with the supporters from North London. All the focus afterwards was on Adebayor's misguided antics but I have not read much about the loutish behaviour of some of the supposedly grown-up Arsenal fans. Objects were thrown onto the pitch and it looked like one of the stewards was hit by an object that was thrown from the away end.

The game continued however and Shaun Wright-Phillips made it 4-1 seven minutes before time. Tomas Rosicky's pulled one back for the Gunners in the dying minutes but it was too little, too late and City bagged their fourth win of the season, giving them plenty of confidence ahead of next weekend's Manchester derby. 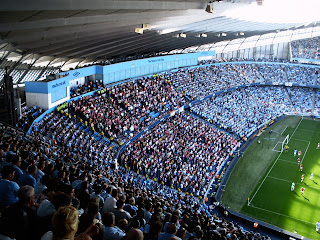 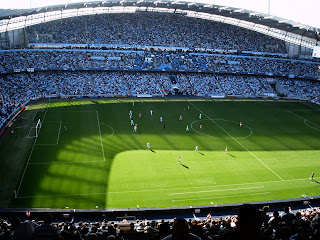 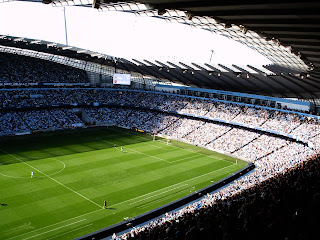 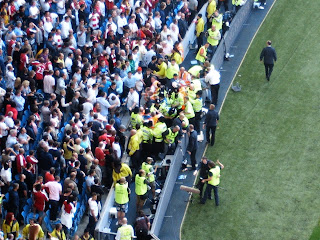 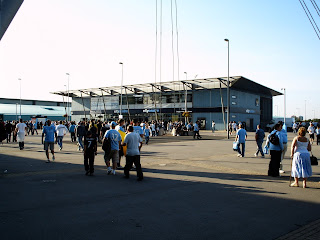 After the game we paid another visit to the massive fan store.

A panorama shot, taken from our seats on the East Stand. The game was a sell-out.

Another panorama, this time taken after the game, again from the East Stand.