Panorama view from the Chadwick Stand.

Yesterday it was off to Ayrshire for the third round Co-operative Insurance Cup clash (I have to say 'CIS Cup' sounded a lot simpler) between Kilmarnock and St Mirren. St Mirren had beaten Kilmarnock at Rugby Park only just over three weeks ago so the Saints were confident they could progress to the quarter final of this competition for the first time since the 2000/2001 season when they reached the semis and lost 3-0 to...Kilmarnock.

Rugby Park is a fairly impressive ground for a club of Killie's stature. Redeveloped in the 1990s, it holds 18,128 which makes it the fourth biggest ground in the SPL after Celtic Park, Ibrox, and Pittodrie. The club rarely use even half of the full capacity at least according to the official attendance figures. The Moffat Stand was closed last night but it looked busier than the 3,561 attendance given. I sat in the away section in the Chadwick Stand and I have to say the leg room was very limited.

Kilmarnock is 40 minutes on the train from Glasgow. It is an old-fashioned non-electrified track and there is only one train an hour. Unlike the other Ayrshire trains it does not pass through Paisley so I had to take the train to Glasgow Central first. From Kilmarnock railway station it is about a 15-minute walk to the ground.

In the first half Killie had the better chances however neither team were able to find the net. Stephen McGinn scored the opening goal for the Buddies after 63 minutes, his third of the season against Kilmarnock. St Mirren got a few more chances as the Ayrshire men desperately tried to score an equaliser however the Saints failed to finish it off and Kevin Kyle equalised three minutes before time. Extra time now looked likely. Andy Dorman however scored the winner in the dying seconds of injury time to book St Mirren a place in the quarter finals of the Scottish League Cup.

For pictures of the 2010 Scottish Junior Cup Final at Rugby Park see this post. 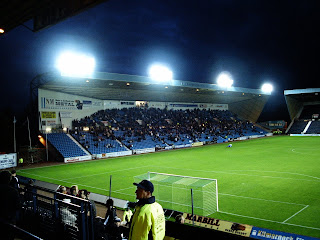 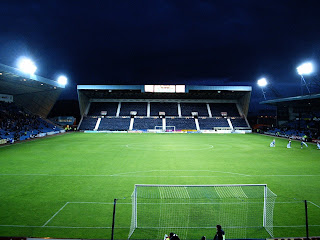 The Moffat Stand remained closed tonight. This is normally the family stand. 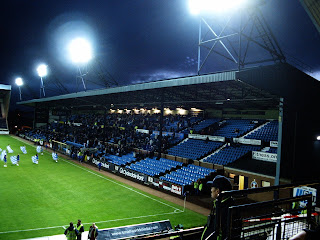 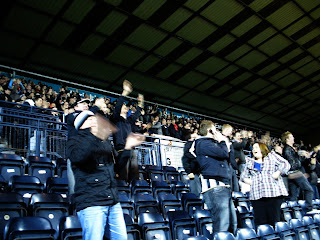 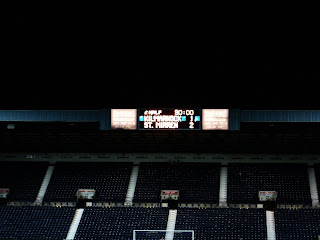 ...and all hoping for a favourable quarter final draw.