Today I went to Cowdenbeath in Fife to see the derby match against East Fife. I took the train to Haymarket (a 45-minute journey from Glasgow Queen Street) where I had to change for the train to Cowdenbeath, which took another 40 minutes. It had turned out a nice and sunny day after the previous night's pelting rain. Central Park, Cowdenbeath's ground, is very close to the station, I would say less than five minutes on foot. I walked to the ground first to take a few pictures and with about 45 minutes to spare I then strolled up the town's High Street looking for a pub. 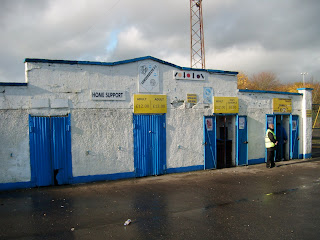 The only entrance to the ground. There was no segregation in place.

I had a quick pint in the Old Cross Guns Inn which is at the top of High Street, around five minutes from the ground. It was quite a friendly place. At about 11:45 I started walking to the ground. This may sound early but the kick-off was scheduled for noon for unknown reasons. This suited me fine as it meant I would be back home nice and early.

The ground itself is quite unusual. There is a tarmac circuit around the pitch and stock car races are staged here every Saturday night according to one ad near the ground (for more information click here). Also there are two main stands. Apparently the old stand burned down partially and a new one was erected next to what remained of the old stand. I got the feeling most Cowdenbeath fans were in the stand. I watched most of the game from the South Terrace which is quite a large terrace but most fans on it seemed to be East Fife fans. There was no segregation in place today and there was not a hint of trouble. Because of the race track you are quite far from the pitch but especially annoying is the high fence erected around the track to protect spectators at the motor sports events.

The game itself was quite entertaining but all three goals where scored in the opening 15 minutes when I was too busy taking pictures at this unusual ground. A fellow groundhopper saw me taking pictures and it turned out he was a postman from Manchester who was on strike today which gave him an opportunity to visit two grounds in one day. Dunfermline were playing Dundee at 3pm today. Dunfermline is about five minutes on the train from Cowdenbeath and I was annoyed I had not thought of this myself. I decided to go to Dunfermline after the game anyway to take a few pictures of East End Park on a match day however I had not budgeted for the £16 to get in so I decided against visiting the game and took the train back to Glasgow at 3:30pm. 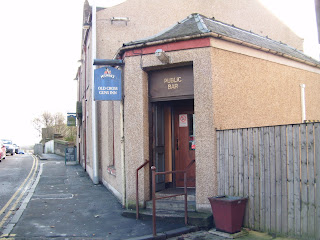 Before the game I had a quick pint in the charming Old Cross Guns Inn. 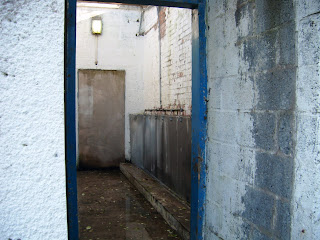 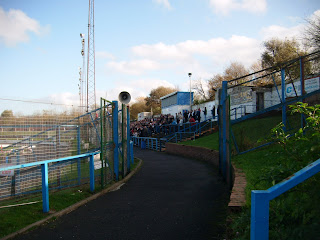 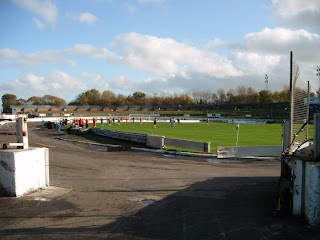 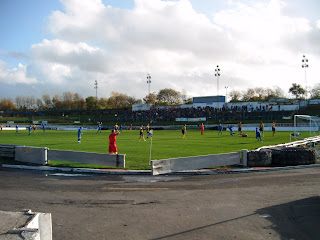 John Robertson scores what turned out to be the winning goal for Cowdenbeath. 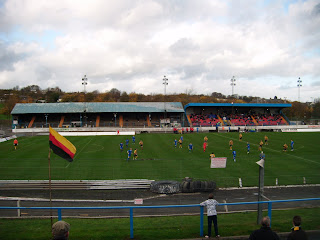 The Main Stands. Note the German flag hanging upside down. 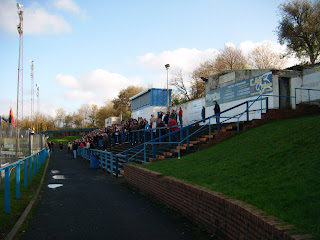 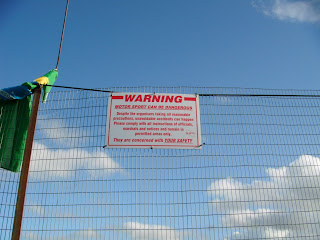 The fence around the pitch obstructed views. 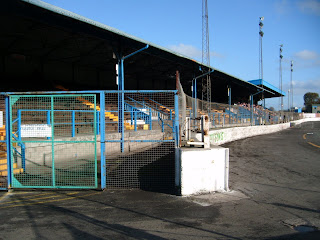 The Main Stands seen from the West Terrace.