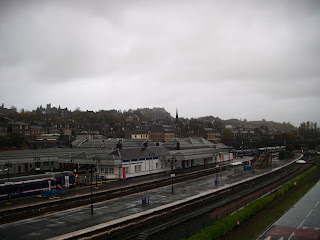 Today I took the bus from Glasgow to the city of Stirling to pay my first visit to Forthbank Stadium, the ground of Stirling Albion FC. Just like two weeks ago when I went to Fort William I made use of the Sunday Mail offer (return to anywhere in Scotland for a fiver) but the train costs only a fraction more. The bus station is adjacent to the railway station and it takes about 20 minutes to walk to the stadium (using the newly built pedestrian bridge over the railway tracks). Stirling is a great place to visit of course but the weather was horrendous today. Torrential rain made me worried that this game would be postponed again however it turned out it went ahead as planned.

I decided to support Clyde today as a I have a bit of a soft spot for them. Also because they were the underdogs against league leaders Stirling Albion I took a seat in the East Stand. The ground, which opened in 1993, is small but the capacity of 3,800 (2,500 of which are seats) is more than adequate for Stirling. The West Stand is slightly bigger than the East Stand. There are terraces behind both goals as well but it is my understanding that they are seldom in use. Although I would normally prefer a terrace over a stand the fact that these are uncovered means I would not have opted for them anyway.

The game was an entertaining affair. Albion unsurprisingly had the better chances in the first half but were unable to find the net and Clyde were lucky to have not conceded a goal by half-time. It was the Bully Wee however who opened the score when Willie Sawyers found the net in the 57th minute. Stirling frantically looked for the equaliser but it looked like this was not their day, particularly when they had a goal disallowed for offside. However substitute Liam Corr scored the deserved equaliser in the 88th minute. 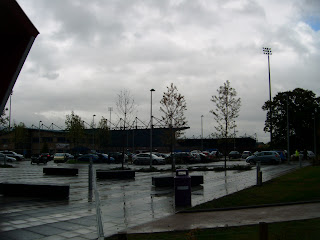 Approaching Forthbank on a miserable day. 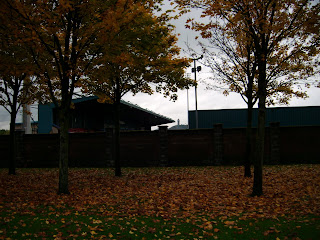 Picture taken before the game outside the ground with the Wallace Monument in the background. 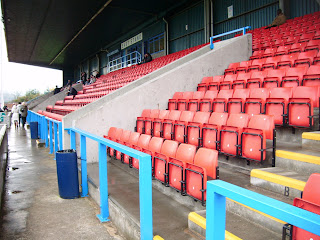 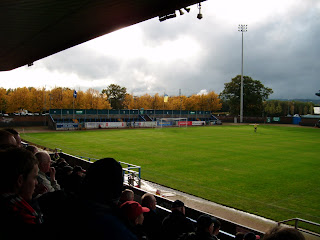 The South Terrace, which was not in use today. 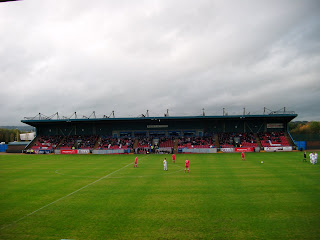 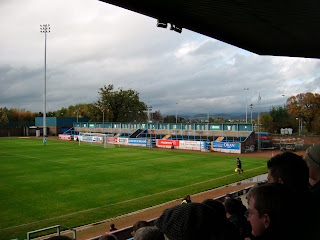 The North Terrace was not open either.