For pictures of a Montrose game at Links Park see this post.
After the game in Arbroath was cancelled yesterday afternoon I decided to make the most of my day so I took the train to Montrose. Montrose were playing Queen's Park in the Scottish Third Division. It took about fifteen minutes on the train to go to Montrose and it was a ten-minute walk to Links Park, home of Montrose FC. I had not really prepared this trip of course but the ground was easy enough to find. Unfortunately however I soon found out that this game was cancelled too. And I was not able to get inside the ground either so all there was left was taking some pictures holding my camera over all kinds of walls and fences. 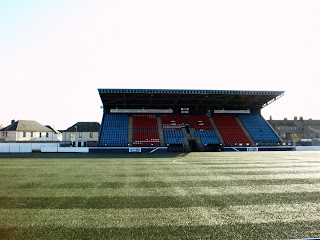 The Main Stand seen from the side.

A panorama view of Links Park. From left to right the roofed Welling Street End terrace, the Union Street Side, the Beach End, and the Main Stand. 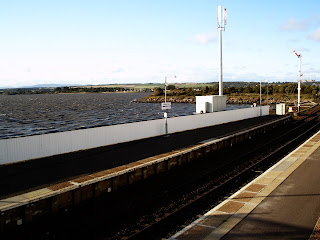 They like building things near the water in these parts...I now had to wait till 17:13 to take the train to Glasgow, or so I thought. A tree had fallen on the tracks near Stonehaven and all trains between Aberdeen and Dundee were affected. Eventually my train arrived at about 19:30. I spent the time in between cancelled trains in The Picture House, a large modern pub near the station. 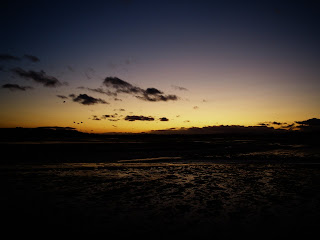 This was the end of a long day with two new grounds but without any football.
Posted by Bas at 12:04