Last night it was off to Ochilview Park for East Stirlingshire against Livington. I was at this ground to see a Stenhousemuir game last July but as part of my plan to complete 'The 42' I had to visit it again to see the Shire. Normally I go to these 'neutral' games as a home supporter however I decided to enter the ground through the away gate so I could take some pictures from the roofed terrace.

This Scottish Third Division match was originally scheduled for 8th August however Livingston did not turn up at Ochilview Park because they did not accept their relegation from the First to the Third Division as a punishment for going into adminstration. However after having lost all their appeals the Lothian club decided to get on with it and they played all their scheduled home games from the second match day onwards.

East Stirlingshire originally hail from Falkirk and they used to play their home games at Firs Park (the ground is still there, for some excellent pictures click here). However the pitch was deemed too small according to new SFL regulations and the club did not have the funds to make the necessary improvements so they agreed on a groundshare deal with neighbouring Stenhousemuir FC. Many people wrongly believe East Stirlingshire come from the city of Stirling as the name of the club is often abbreviated as East Stirling.

In the past decade the Shire has acquired somewhat of a cult status as 'the worst football club in Britain.' The club ended bottom of the Third Division for a few years in a row. Author Jeff Connor even followed the team during the 2004/2005 season and turned it into a book called 'Pointless', which was subtitled "A season with Britain's worst football team". I have not read it myself yet. However recently the tide has turned somewhat. Last year the club ended in third place and nearly missed out on the play-off final in the semi final against Cowdenbeath.

Obviously the tide has turned for Livingston as well but in a rather more negative way. After promotion to the SPL in 2001 they qualified for the UEFA Cup after finishing third in their first season in the top flight. In 2004 they won the CIS Cup. From there it went downhill and there is still the possibility of a hefty point deduction for not showing up for their first scheduled Third Division match.

Last night the Shire started the match well and Stephen Maguire scored two first-half goals in give the part-time team a comfortable lead. Robbie Winter pulled one back for Livi just before the half-time whistle. Normally attendances at East Stirlingshire rarely exceed 350 so last night's 567, obviously helped by the relatively large travelling support, counts as a bumper crowd. I have to say the Shire fans were very vocal and created an excellent atmosphere at times.

In the second half the Lothian club looked the stronger team but they were not able to find the net. In fact it was East Stirlingshire's Simon Lynch who scored the only goal in the second half. The deserved 3-1 win meant the Shire climbed up to second place. Livingston are now in fifth place after having lost already three times in the league.

Fore more (and better) pictures of this ground see this post. 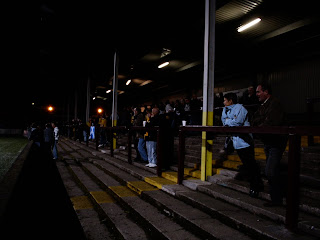 The Livingston fans on the terrace. 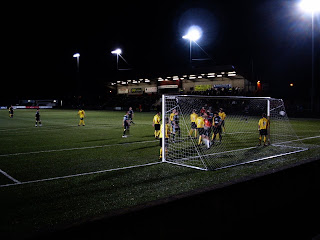 The stand in the background.