For more pictures of Celtic Park see this post (v AZ),this one (v FC Utrecht) and this one (v Rangers).
Today I went to Celtic Park to see Celtic take on St Mirren. This was a short trip for me, 30 minutes on the bus from my house, then another 30 minutes to walk from Glasgow city centre to Celtic Park.

Initially St Mirren gave Celtic a good game until a Chris Innes own goal in the 39th minute. I had really hoped for a 0-0 half-time score but unfortunately it was not to be. Only three minutes later Samaras scored a second. Luckily Higdon scored one for the Saints just before the half-time whistle. However any hopes Saints had to gather something from this game were dashed by Scott McDonald's 61st-minute goal.

St Mirren goalie Paul Gallacher also saved a late Scott McDonald penalty. Innes had blatantly handled Barry Robson's corner and was shown a yellow card and then immediately a red one. Referee Steve Conroy had wrongly thought he already booked Innes earlier in the match. The St Mirren player had already left the pitch when the referee realised his mistake and the player was called back.

To be honest I had not noticed this incident. My seat was on the second row in the away section, tucked away in a corner between the Lisbon Lions Stand and the South Stand. I had a ticket with an 'unrestricted view' but it was by no means a great seat. Also after every goal stewards and policemen surrounded the pitch, completely blocking my view, with particular focus on the well-behaved St Mirren support. I am not sure it was the best method of crowd control I have ever seen. I had been looking forward to this game but I had a better time at Stirling Albion and Annan Athletic recently although I must admit today's result probably had something to do with it. 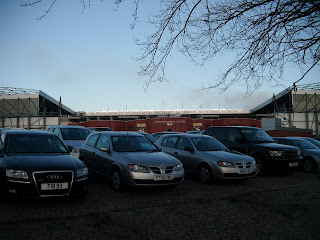 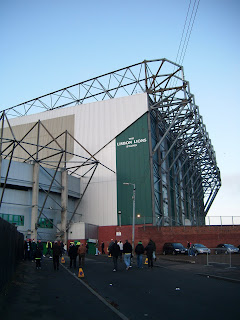 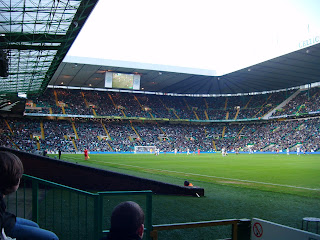 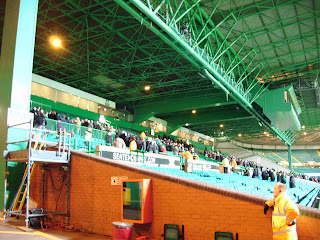 The South Stand after the final whistle. 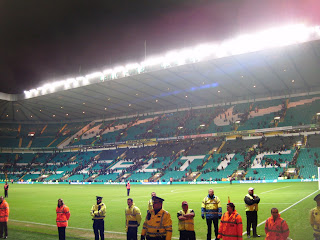 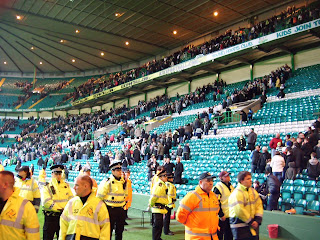 The Lisbon Lions Stand. Also a few people making sure you are not entering the pitch...