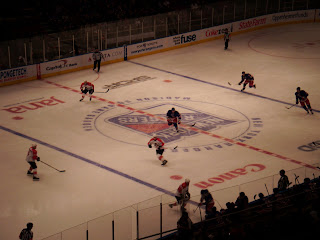 No football this time! Last week my wife and I spent a few days in New York, our first visit to the States. Of course I wanted to see a few sports grounds as well. The Major League Soccer season had finished so I could not see the New York Red Bulls (formerly known as the MetroStars) in action. They are playing in New Jersey as well (in the Giants Stadium and from next year in the newly-built Red Bull Arena) which is not very easy to get to if you are staying in Manhattan for only a few days. NFL team New York Giants also played at home during this weekend but they also play in the Giants Stadium as you may have guessed. The baseball season had finished as well. This meant I could choose between the juicy NBA fixture NY Knicks v Boston Celtics or the NHL tie between NY Rangers and the Florida Panthers.

I preferred the NBA game but my wife is quite fond of ice hockey. Since both the Knicks and the Rangers play in Madison Square Garden I did not mind seeing the NHL game either. 'The Garden' is of course a legendary venue. The current arena opened in 1968. It holds 18,200 for hockey games and 19,763 for basketball matches. According to the ESPN site there was a capacity crowd but it was definitely not full. We had bought our tickets through SeatExchange.com which is the official way for season ticket holders to sell seats for games they will not attend. We had bought ours for only $43 each in September and there were still hundreds available when I checked a few days before the game. The absent season ticket holders may be an explanation for the inflated attendance figure.

It was my first ever ice hockey game and I thought it was quite entertaining. Unfortunately New York lost 3-2. They had taken the lead in the first period but Florida managed to get a 2-1 lead in the second period. In the third period the Panthers scored a third. Rangers could not turn the tide despite scoring a second goal late into the final period. 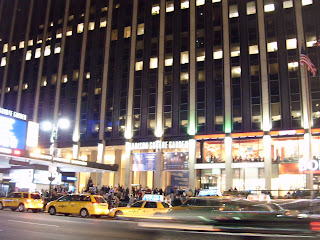 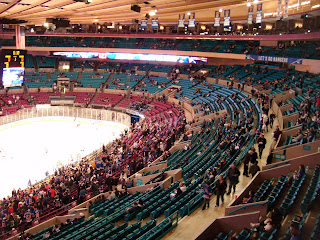 The stands before face-off. 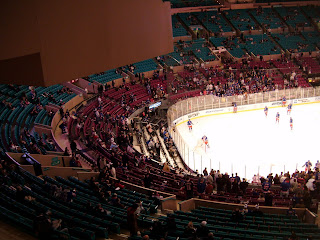 It took a while for the stands to fill up. 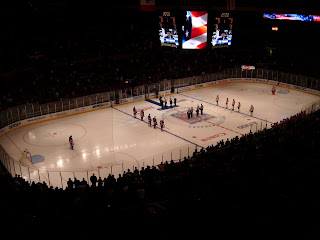 Action shot during the first period. 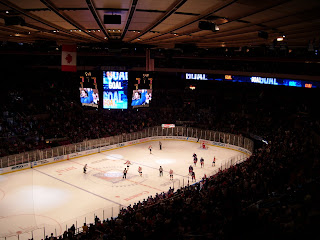 Litte Rangers during the intermission. 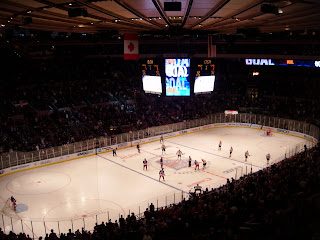 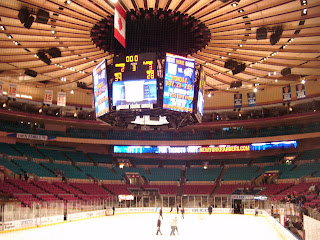 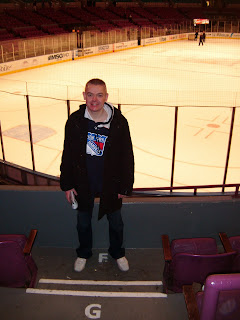 Myself after the game.