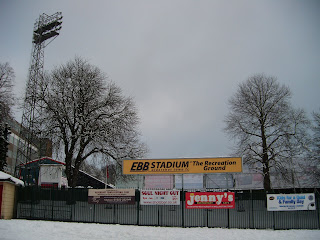 Last Saturday I took these pictures around Aldershot Town's ground, which is now officially called 'The EBB Stadium at the Recreation Ground'. My wife and I stayed in nearby Frimley for four days to see the darts at the Lakeside Complex in Frimley Green during the last four days of the BDO World Darts Championship. I had already planned to visit Aldershot Town's stadium before I headed off to England and I had initially meant to take a train. However with the excessive snow in this part of the country there was no train service between Frimley and Aldershot so I took the bus instead.

After about 30 minutes I got off at Aldershot bus station and started the short walk to the ground. Unfortunately I was not able to get inside the stadium so I was left with taking some pictures from the outside.

The Shots have played in League Two since last season. Founded in 1992 Aldershot Town were founded after the old Aldershot FC went out of business. It took several promotions and sixteen years for league football to return to Aldershot. The compact Recreation Ground has a capacity of 7,100 which includes 2,000 seats. Last season the average attendance was 3,276.

I cannot wait to visit a proper football match again...hopefully Morton v Celtic will go ahead this Tuesday! 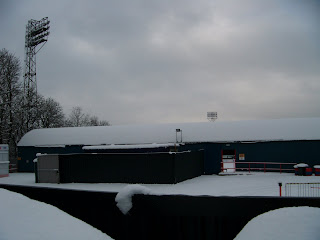 The East Bank seen from outside the ground. This is the away end. 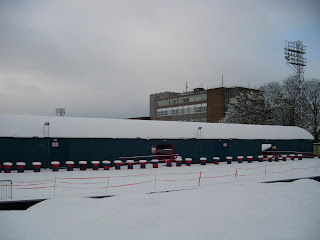 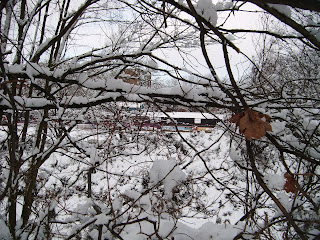 The North Stand stand seen through the snow-covered trees. 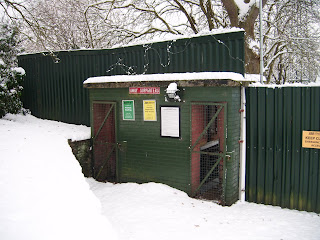 Turnstules leading to the away end. 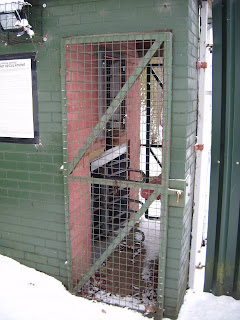 A closer look at the turnstiles. 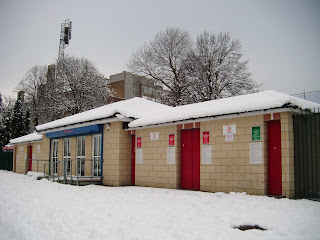 The club office and home turnstiles.
Posted by Bas at 15:34