For pictures of a Motherwell home game at Fir Park click here.

On Tuesday I went to Motherwell where the first semi-final of the 2010 Co-operative Insurance Cup (the Scottish league cup) was staged. Fir Park was the venue chosen by the Scottish Football League to host the first semi between St Mirren and Hearts. I know many St Mirren fans had preferred Hampden but I always thought the atmosphere at Fir Park would be much better. The last time the Saints played in a semi-final in this competition (and lost 3-0 to Kilmarnock) only 9,213 attended. A similar number were in attendance today however I had expected a bigger crowd as Hearts are a bigger club than Kilmarnock.

All fixtures in this competition, apart from the final, are played in midweek which does not add to the appeal for many fans. I managed to leave work a couple of hours earlier than usual and we were in Motherwell at around five o'clock. After my first visit to a Wimpy restaurant in over 25 years we headed for the New Century Bar in Windmillhill Street. Most punters in here were Hearts fans but the atmosphere was good.

We then headed for Fir Park and took our seats in the Davie Cooper Stand. St Mirren had been allocated the Phil O'Donnell Stand as well. The game was not a sell-out but there was a great atmosphere. The Buddies dominated the match and after missing a few chances Billy Mehmet scored his cracking goal early in the second half. It was no more than the Saints deserved. The men from Paisley continued to dominate and, despite a few nervy moments at the end, managed to reach their first national cup final since 1987 and their first league cup final since 1955. 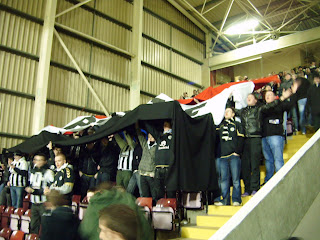 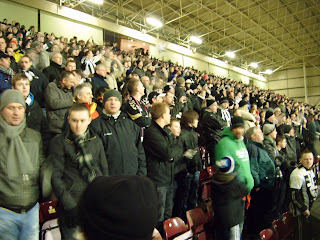 Again the Davie Cooper Stand, which was sold out. 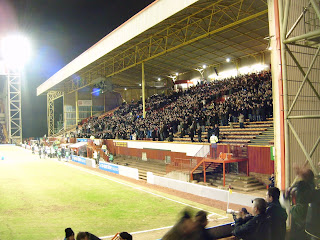 The Phil O'Donnell Stand was also allocated to fans from Paisley but it was not filled to capacity. 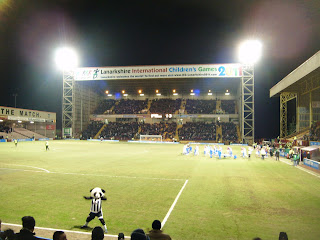 The South Stand before kick-off, one of the two stands allocated to the Hearts fans. 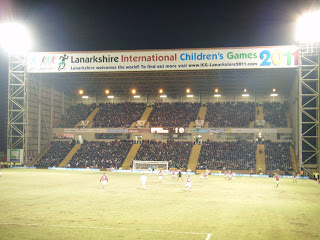 Again the South Stand. This stand was also sold out. 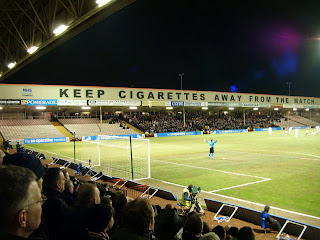 The East Stand also housed some of the Hearts fans. 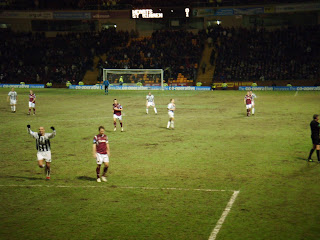 The final whistle. St Mirren have reached their first League Cup final since 1955.