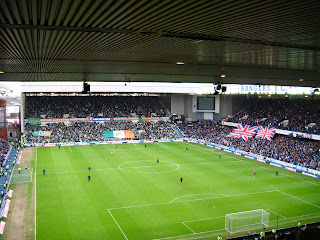 Yesterday, after having lived in Scotland for over nine years, I finally visited my first Old Firm derby. Tickets for the meetings between Glasgow giants Rangers and Celtic are never on general sale and it is typically only season ticket holders from both clubs that attend these fixtures, apart from some sponsor and hospitality seats.

I am not a supporter of either of the clubs but I was able to borrow my friend Martijn's season ticket so I took my seat in the Copland Stand amongst the Rangers support. Before this game Rangers were seven points ahead of their bitter rivals in the league and it was a must-win match for Celtic. Earlier this week Celtic also appeared to have increased pressure on referee Dougie McDonald when an 'anonymous source' at Celtic revealed that the Parkhead club had complained to the SFA about various dubious decisions made by referees this season that all went against Celtic.

Before kick-off there was supposed to be a minute's silence as well for Gerhardt 'Gerrie' Neef, who was Rangers' goalkeeper when they won their first, and only, European trophy, the 1972 European Cup Winners' Cup. Unfortunately this silence was not observed by an admittedly small minority of the Celtic support which provoked booing from the home support. Embarrassing for both sets of supporters if you ask me and disrespectful to Neef's family who apparently had asked for a minute's silence instead of the cringe worthy minute of applause.

Of course this kind of controversy is all to be expected on derby day in Glasgow. Like it or not this is the biggest fixture on the Scottish football calendar. The Glasgow derby is followed with interest by the majority of the people in the West of Scotland and I think all these incidents are just a reflection of what is going on in society in this part of the world. This is not typical of Scotland I think, I know it is the same when Ajax and Feyenoord are playing each other in Holland. I was very impressed with the policing of the match and the crowd segregation before and after the game however.

The game itself was fast and tense with chances on both sides with both goalkeepers, Artur Boruc for Celtic and Allan McGregor for Rangers, in excellent form. It looked like Maurice Edu opened the score for Rangers but referee McDonald rightly disallowed the 'goal' because Kenny Miller had handled the ball.

In the second half Rangers looked the dominant side and they knew that a draw would suit them much better than Celtic. After 66 minutes Scott Brown was controversially sent off after he and Kyle Laffery clashed but it seemed a harsh decision. Rangers tried frantically to capitalise on the advantage but only in the third minute of injury time did Edu score the winning goal after a goalmouth scramble. 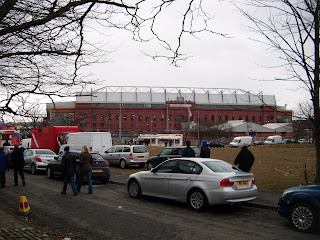 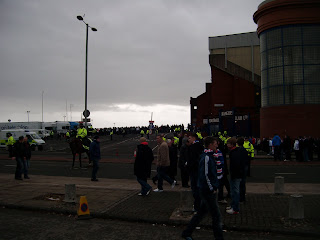 Celtic fans queueing up outside the Broomloan Stand. 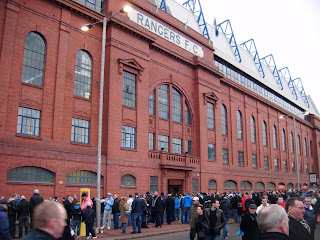 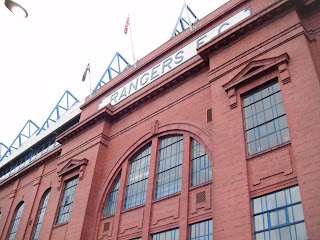 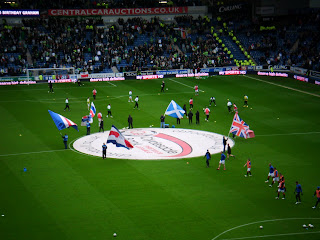 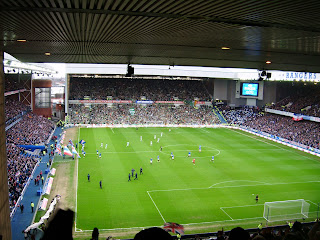 Both sets of players are entering the pitch. The Broomloan Stand, the opposite end, housed the Celtic fans. 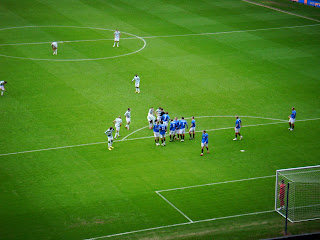 Celtic are getting ready to take a free kick. 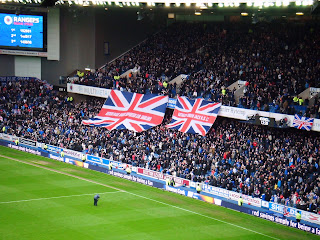 Banners on display during half time. 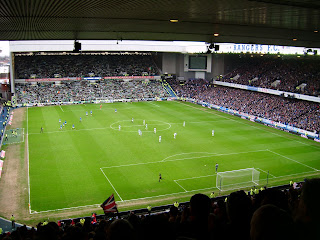 The players are getting ready for the second half. 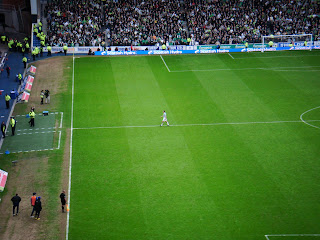 Celtic ended up playing with ten men after Scott Brown was sent off. 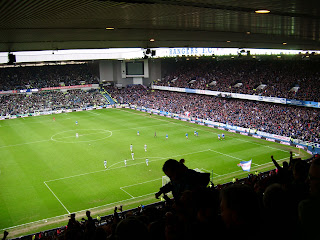 Maurice Edu scores the only goal of the match three minutes in injury time. 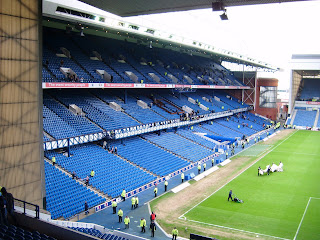 The Main Stand after the game. 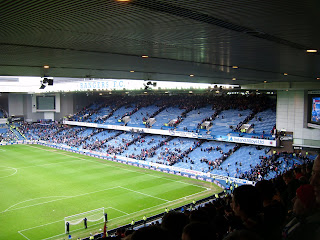 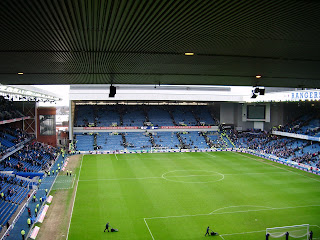