Yesterday my wife and I took the train to Edinburgh for this year's edition of the Calcutta Cup. The Calcutta Cup is the trophy Scotland and England play for every year when they meet in the Six Nations Championship. However there are also points at stake and England needed to win this match if they wanted to retain the chance to win this tournement. After Scotland's defeat in Italy two weeks ago Scotland probably had to win this game to avoid ending the Six Nations with the wooden spoon.

Yesterday's game had a late kick-off time of 5pm which meant there was plenty of time for some pre-match refreshments in the centre of Edinburgh. We started the day at the Tiles Bar in St. Andrew Square which has become a bit of a traditional starting point when we go to Edinburgh to watch the rugby. After a few pints here and having watched Robbie Keane put three past hapless Kilmarnock we headed for Rose Street. We skipped The Standing Order, the massive JD Wetherspoon's pub, this time and went for a couple of the smaller pubs in Rose Street. As is the norm when Scotland play any of the home nations all pubs were packed to the rafters.

At around 16:00 we decided to make our way to the ground on foot. We normally leave about one hour before kick-off and we usually arrive in our seats just in time. Had our seats been in the South Stand instead of the North Stand we would have been in time for the national anthems as well.

I suppose the game itself was not for the purists but it was a close affair and tense from start to finish. Scotland never managed to score any tries (which was no surprise of course) but luckily neither did England. Glasgow's Dan Parks scored all 15 points for Scotland. Jonny Wilkinson became the all-time leading scorer in the history of the Five/Six Nations but he was replaced injured after having scored 9 points for the English. Leicester's Toby Flood scored two more penalties for England but in dramatic fashion missed a late penalty which would have won the game for England and Gloucester's Rory Lawson blocked his even later drop-goal attempt.

The 15-15 draw was the first draw between the two sides since 1989 but the 18th overall, which is apparently a record between two nations. The result did not suit any of the two teams but it meant the Calcutta Cup stays in England for at least another year. 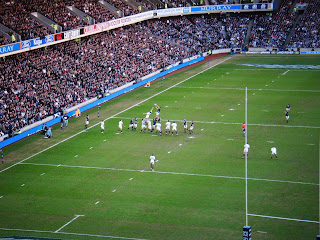 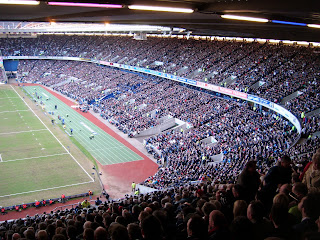 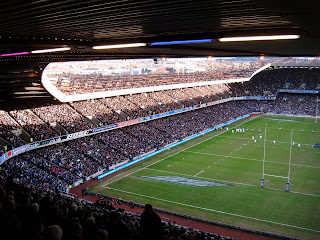 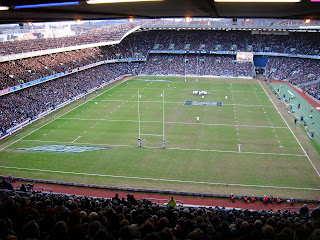 The South Stand in the background. 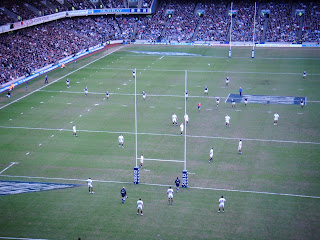 Dan Parks is about to score three of his 15 points today.