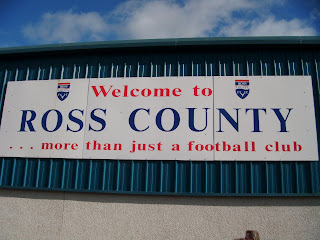 Today I finally I made use of the Sunday Mail/First ScotRail promotion, which offered return tickets to any destination in Scotland for only £15. The offer ends on 31st March so time was running out. Because of the bad weather in recent weeks I had not dared to venture very far however I did not want to miss out on today's Highland derby and in fact I had ordered the ticket for the match a few weeks in advance on the internet. With the previous games against Inverness Caley Thistle, both home and away, well attended this seemed the most attractive fixture if I was to travel all the way to Victoria Park in Dingwall, home of Ross County.

It is a fair journey travelling from Paisley to Dingwall. After the three-and-a-half hour journey from Glasgow Queen Street to Inverness it was another 30 minutes on the train to Dingwall. I arrived in Dingwall about 50 minutes before kick-off. There were a few pubs near the station, which also happens to be very close to Victoria Park, but they were all very busy and I decided I was not that thirsty. With not much else to do I walked straight to the ground and I was not the only one, many fans, both home and away, were in the stands early. Today's attendance of 5,928 exceeded the population of the town of Dingwall which is only 5,026 according to the 2001 census.

The match itself was an entertaining and lively derby game but unfortunately there were no goals today. Also I left about 15 minutes before time because I did not want to chance missing the connection to the last train from Inverness to Glasgow, especially with St Mirren's first appearance in a cup final since 1987 scheduled for the next day. Luckily the game remained goalless in my absence. 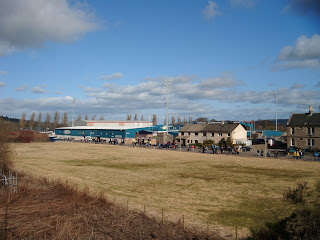 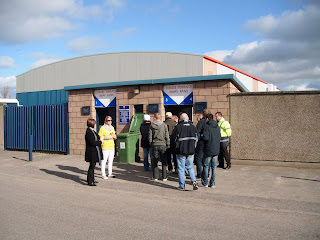 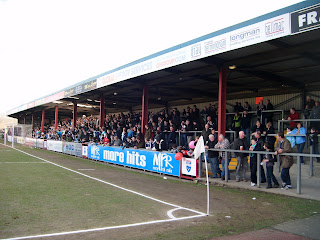 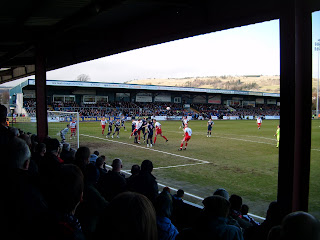 View from the Jail End Terrace. 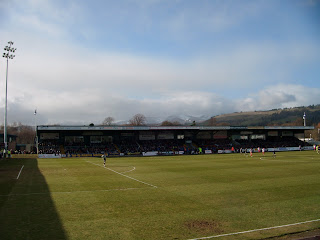 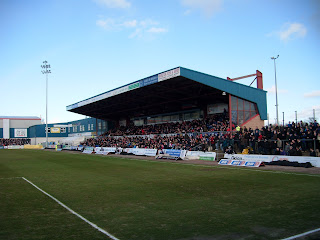 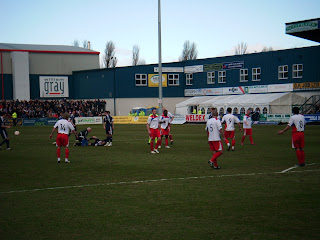 Plenty of incidents in this Highland derby. Another view from outside, almost 6,000 were still inside, I decided to catch the 16:37 train to Inverness.