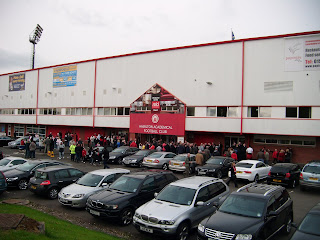 Last Wednesday I visited New Douglas Park to see Hamilton Accies take on St Mirren. I had already planned to see this match as a St Mirren fan anyway but the decision of the Lanarkshire club to cut down the gate price to £5 removed all hesitations I might have had. As per usual I took the train. It is a 20-minute journey from Glasgow Central and an off-peak return ticket from Paisley is only £4.90.
It was a good thing I did not have to pay full price (which is a staggering £22, no wonder Accies have the lowest crowds in the SPL...then again only just over 3,000 fans turned up tonight) because this end-of-season affair surely was not worth much more than a fiver. I could have witnessed a twelve-goal thriller a couple of miles down the road at Fir Park for a tenner but it was not to be. Had St Mirren won they could have leapfrogged Aberdeen in the final league table (the Saints are welcoming the Dons tomorrow) but to be honest the Buddies did not deserve the three points. Marco Paixao's 40-yard shot, only minutes into the game, was the highlight of the game. The ball hit the crossbar and bounced towards the line but no Accies goal was given. From what I have seen on the telly the referee's decision was correct as the ball did not appear to cross the line completely but it was very close.

After last Saturday's 1-1 at Falkirk it had already seemed highly unlikely that St Mirren would go down however after this 0-0 draw it became official: the Saints will play in the SPL for at least another season. Happy days!

For other pictures of New Douglas Park see this post. 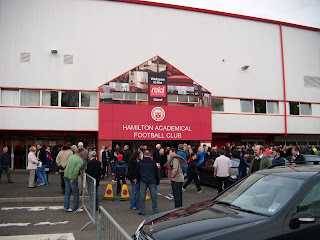 The Reid Furniture Stand before the game. 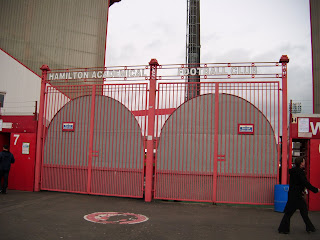 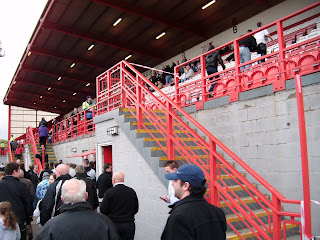 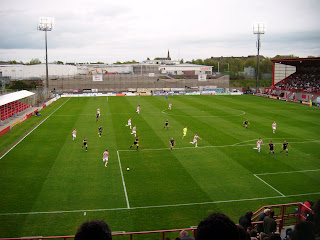 Still no stand on the southern end of the ground. 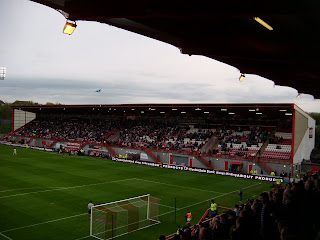 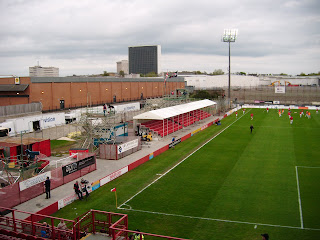 The temporary stand which I have never seen in use.