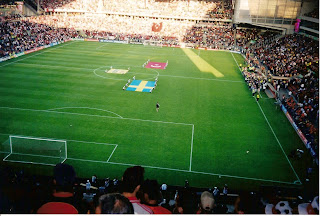 Again some old pictures, these were taken at the Philips Stadion during a Euro 2000 group match just over ten years ago. This was the first time that the European Football Championship was hosted by two countries, Belgium and the Netherlands. I still lived in the Netherlands at the time and had managed to get tickets for Sweden v Turkey at the Philips Stadion in Eindhoven and Denmark v Czech Republic at Sclessin in Liège in Belgium.

Sweden v Turkey on 15th June was my first Euro 2000 game. Also it was my first visit to the Philips Stadion which had been slightly expanded prior to the start of the tournament. It currently has a capacity of 35,000 and has a four-star UEFA rating. The 2006 UEFA Cup Final (Sevilla 4 Middlesbrough 0) was staged at the home of PSV.

The Sweden v Turkey game I had chosen to see was a dreadful affair, almost as bad as the pictures I took, and ended goalless. Almost four years later, in February 2004, I saw my first PSV game at the ground. Roda JC were visiting and I watched the game from the away end. It was a famous win as it was the first time Roda had won in Eindhoven since August 1989. Remarkably Roda would take all three points another three times at PSV in the next five seasons. 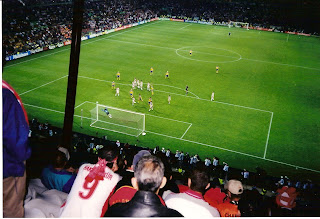