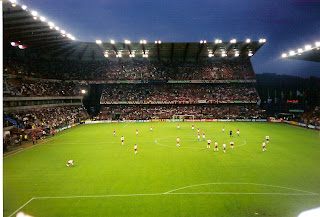 Now that the season is over some old pictures I found of Sclessin, or Stade Maurice Dufrasne as it is officially called, the home ground of Belgian side Standard Liège. However it was not Les Rouches I had come to see ten years ago but the Euro 2000 group D game between Denmark and the Czech Republic.

I still lived in the Netherlands at the time the tournament was hosted by both Belgium and the Netherlands and I remember that I thought it was quite exciting to have a big tournament just outside your front door. I had applied for tickets for several games but unfortunately I was not allocated any but just before the tournament started tickets for some group games had become available again. I got tickets for the game in Liège and also for the Group B game between Sweden and Turkey which was played in Eindhoven. I remember I had to pick the tickets up in Rotterdam which was over two hours away on the train for me...As I lived in Maastricht at the time I picked these games because both were easy to get to by train and, more importantly, I would be able to take a train back home after the game, something I would not be able to do had I opted for any of the games in for example Rotterdam or Amsterdam.

I took the train from Maastricht to Liège after work and after barely 30 minutes I arrived in Belgium's third city. Unfortunately the game I went to see, the third group game for both teams, was meaningless as both teams had lost their first two games and were unable to qualify for the the quarter-finals. I had met some Czech supporters in an Irish pub in the city centre who were good fun and I decided to be a Czech supporters for the night, I even bought a Czech scarf. The Czechs were still hurting from the 1-0 defeat to the Netherlands. Frank de Boer's spot-kick in the 89th minute ensured at least one of the two hosts qualified for the quarter finals. Referee Pierluigi Collina controversially awarded the penalty after Ronald de Boer's shirt was pulled by Jiri Nemec.

The Czechs were clearly intent on restoring some pride and Vladimir Smicer, who played for Liverpool at the time, scored both goals in the second half. I remember the atmosphere as pretty good considering the fact both teams had nothing to play for anymore and Sclessin was an impressive ground with steep stands and loads of character. 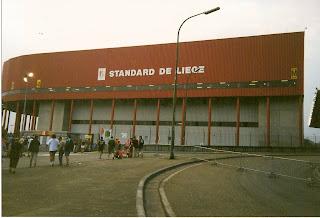 Approaching Sclessin. There were free shuttle buses from the city centre to the stadium. 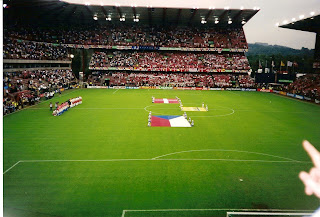 Both teams before kick-off. As far as I know the stands do not have names only numbers (someone please correct me if I am wrong...). We are looking in the direction of Stand III here. All pictures were taken from my seat in Stand IV. 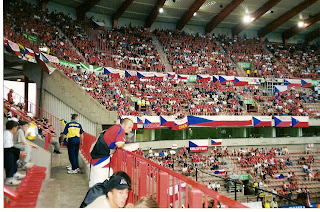 Czech fans on Stands I and IV. 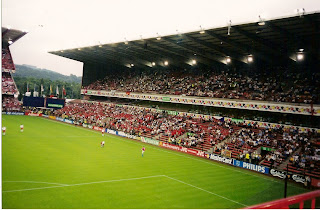 Quite a number of empty seats but still a good atmosphere. This is Stand II.