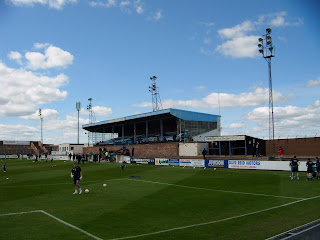 Today I visited a sun-drenched Station Park to see Forfar Athletic v East Stirlingshire, which was the second leg of the Second Division play-off semi-final. The first leg had ended 1-0 to Forfar and the Loons were favourites to make it through to a two-legged decider against (probably) Arbroath. East Stirlingshire had a good season, giving league winners Livingston a serious challenge until their form collapsed towards the end.

Station Park in Forfar is, despite its name, not near the local railway station. In fact the nearest station is 14 miles away, in Dundee. Forfar's station was closed years ago as part of the Beeching Axe. Of the 42 Scottish League grounds, four are not located anywhere near a train station which makes them more awkward for me to visit. The first of these four I visited two weeks ago (Bayview Stadium), the other two are Glebe Park (Brechin City) and Balmoor (Peterhead). Luckily I was able to travel to Dundee from Glasgow today with a half-price return ticket obtained through ScotRail's Advance loyalty scheme but this still set me back £16. In Dundee I had a pint in The Capitol, a Wetherspoon pub near Seagate Bus Station where I took the number 20 bus to Forfar (£6 for a day ticket, cheaper than a return according to the driver). After a pleasant 35-minute bus journey I got off at High Street East in Forfar. From there it was a ten-minute walk to the ground. The turnstiles did not open until 2:30pm so I took a few pictures outside the stadium first. After entering Station Park I made sure I tried one of the famous Forfar bridies first and I must say it did not disappoint.

The ground did not disappoint either, a pleasant old-fashioned football stadium with an all-seater main stand, a roofed terrace on the other side and terracing behind both goals. The Forfar fans were a bit quiet today but the boisterous Shire contingent were in good form.

James Bishop put Forfar 1-0 ahead in the 4th minute and I feared the contest was over already but East Stirling did not give up and it was all-square 15 minutes before time courtesy of two Andrew Rodgers goals. 'Away goals' do not count in these play-offs and extra time was looming until Stephen Tulloch scored the equaliser for the Loons. In the dying minutes East Stirlingshire were reduced to ten men when Edward Forrest was sent off after receiving a second yellow card.

Forfar will now play Arbroath (who beat Queen's Park 6-2 over two legs) on Wednesday. My bus just outside the ground arrived bang on time at 4:56pm and I was able to catch the 5:51pm train back to Glasgow. 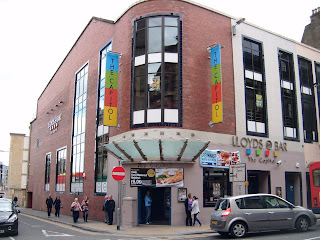 A pre-match Erdinger in The Capitol. 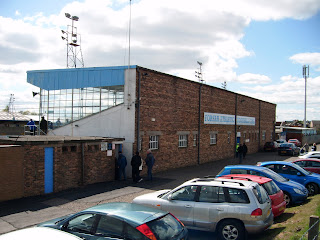 The Main Stand before the game. 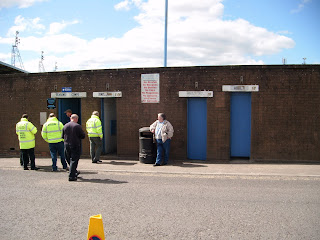 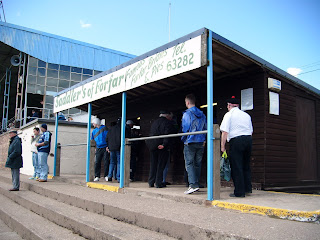 The Forfar bridie can definitely be recommended. 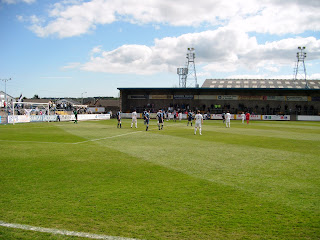 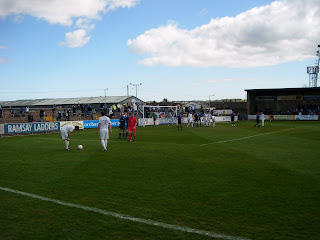 The Shire are getting ready to take a free kick. 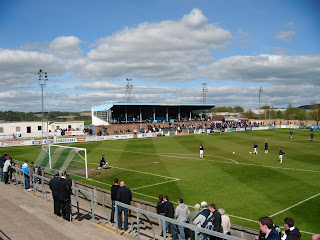 The Main Stand at half-time. 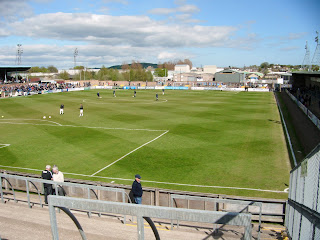 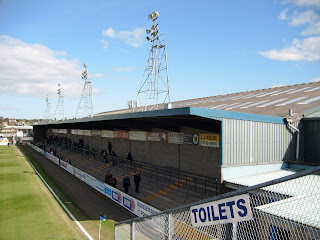 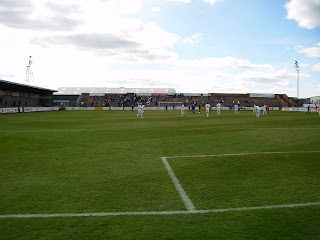 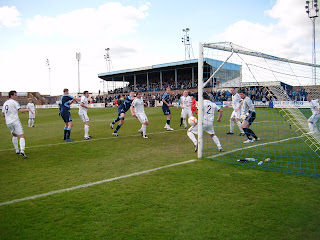 I was lucky to catch Forfar's equaliser on camera.