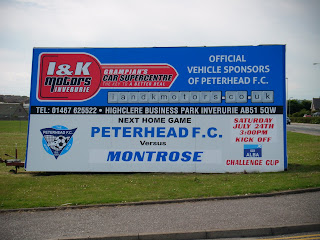 Yesterday I kicked off the 2010/2011 season with a visit to a new ground. Peterhead were taking on Montrose in the first round of the ALBA Challenge Cup, a cup competition in which the 30 Scottish Football League teams take part. The final has already been scheduled for November and the competition is usually won by one of the First Division sides vying for promotion to the SPL. Last year's winners were Dundee who looked destined to move up to the big boys last season but whose campaign imploded in the latter stages of the season.

The Challenge Cup is not the most important competition in Scottish football but SFL supporters all over the country must have been looking forward to the first competitive game since May. I know I was and I had been planning this trip for a few weeks. Peterhead, in the northeast of Scotland, is a difficult place to get to if you stay in Paisley and rely on public transport. There is no train station in Peterhead, in fact the nearest train station is 32 miles away in Aberdeen, which makes Balmoor the furthest away from a railway station of all senior football grounds in Britain.

Travelling by train from Paisley to Aberdeen is usually not cheap, an off-peak day return ticket will set you back almost 50 quid but thanks to ScotRail's Advance loyalty scheme I was able to buy a return ticket to any destination in Scotland for £25. Not only that, it was actually a ticket for two people, who could travel anywhere for said amount. Not a bad deal but unfortunately people were not queueing up to join me on a 10-hour round trip to see a third-tier side so I went by myself. A big mistake according to the conductor on the 8:41am Glasgow Queen Street-Aberdeen train. 'You should have a friend with you,' he said. I thought he was joking but no, the guy was being serious. 'The offer is for two people you should not be travelling alone, technically your ticket is not valid,' he added. This guy would have been a great source of inspiration for John Cleese. 'But I have paid the £25 and I am actually leaving you an extra seat,' I countered. The jobsworth was having none of it: 'Like I said, the offer is for two people, don't do it again.' I was not going to argue with him, who knows what this guy was capable of when challenged in the line of duty, but I was annoyed to be made looking like a fraudster. Needless to say the conductor on the 6:30pm train back to Glasgow had no problems with me travelling by myself. 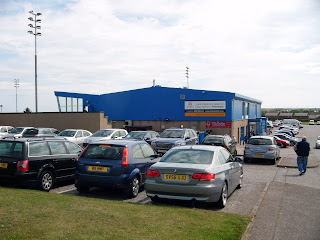 I arrived in Aberdeen at around 11:15 and after having bought a Red Bull Salzburg away top for a tenner at Sports Direct I made my way to The Justice Mill, one of the Wetherspoon pubs that were still on my to-do list. After a half pint of Tuborg, unfortunately all I had time for, I rushed to Union Square bus station where I took the 263 Stagecoach bus to Peterhead (£10.10 for a return ticket). After a comfortable journey of an hour and 10 minutes the bus dropped me off in Peterhead, just outside The Cross Keys, which is - yes, you guessed it - the local Wetherspoon pub. I had a beer-and-burger and then made my way to the ground, which is a 15-minute walk from the town centre.

Peterhead FC are a former Highland League side and only joined the SFL in 2000, just before I arrived in Scotland. The Blue Toon have been quite successful, winning promotion to the Second Division in 2005. Balmoor is a well maintained and fairly modern ground with modern-looking stands on both sides and terracing behind the goals. I had been looking forward to a cup thriller but Peterhead were much stronger than their Third Division opponents. David Wyness needed only 7 minutes to score his first goal for his new club. After the break the Second Division side really went to town with a Stephen McNally own goal in the 50th minute and Wyness's second six minutes later. Already described as an 'early contender for goal of the season' on Peterhead's official website was Paul Emslie's effort from about 40 yards which took Gable Endies goalie Scott Bennett completely by surprise. Martin Bavidge scored the fifth Peterhead goal from close range with 15 minutes left on the clock. I left the ground in injury time to make sure I would make the 5:05pm bus back to Aberdeen but I was able to hear (and see) the final whistle from outside the stadium. 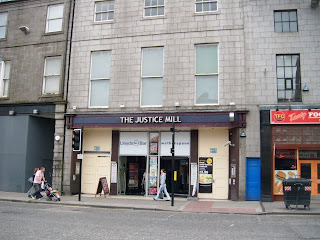 First a quick (half) pint in The Justice Mill in Aberdeen. 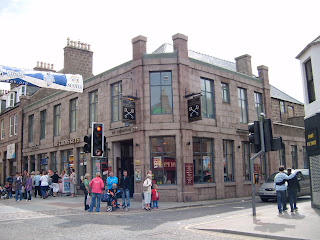 Then something to eat in The Cross Keys in Peterhead. 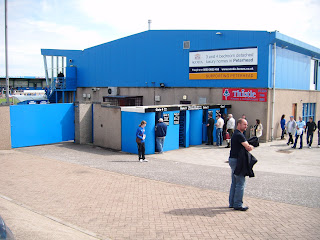 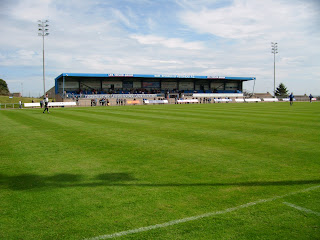 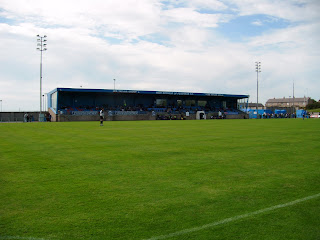 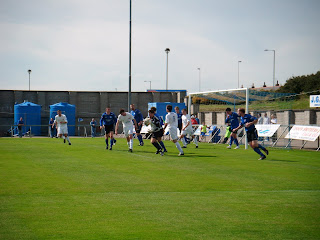 The Gable Endies were unable to find the net today. 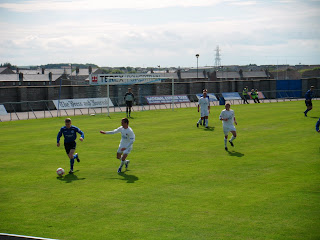 No stands behind either goal. 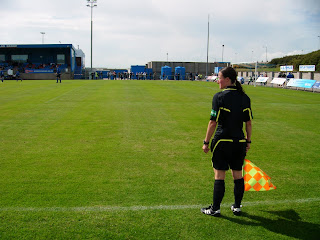 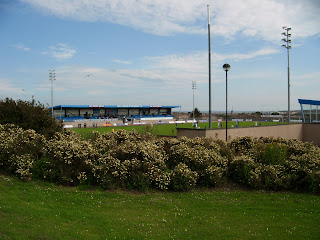 I had left the ground just before the game had finished, this picture was taken seconds after the final whistle.