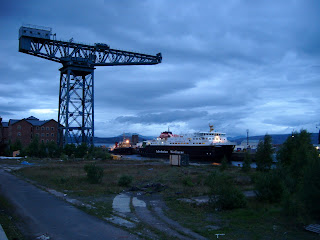 After last Saturday's trip to Peterhead I stayed a bit closer to home last Tuesday. I took the train to Greenock, for the second time that day as I work in Greenock, for the annual Renfrewshire Cup 'final' between Morton and St Mirren. At least the Ton went through an actual semi-final to reach it, thrashing amateurs Moorcroft 13-0. According to Morton chairman Rae Douglas in tonight's matchday programme the amateur team played 'well and competed well.' At least that's something I suppose.

Morton and St Mirren have enjoyed a longstanding rivalry for decades and it has remained strong despite both teams not having played in the same league for over a decade. This traditional pre-season 'friendly' is always fiercely contested and never meaningless to use a pre-season cliché. Saints were poor against last year's First Division strugglers but then again I do not think anyone has been expecting an easy 2010/11 season for the Buddies. The loan deal Celtic's Paul McGowan had signed shortly before the game at least was a bit of good news. The ex-Morton player came on as a replacement for Steven Robb eight minutes before time and added a bit of spice to the occasion.

There were no goals during 90 minutes of regular time which is worrying for St Mirren as they still seem unable to find the net easily, even against opposition from the second tier. It also meant I would not be able to make my 9:31pm train back to Paisley. Expecting extra time I went to the snack van for a coffee, no pies in the away end unfortunately, just something resembling a hamburger. Then it turned out there was no extra time and the teams had already started taking penalties. When John Potter scored the deciding 4-3 for St Mirren I had lost count. As there was no extra time I could still make the 9:56pm train from Cartsdyke to Paisley. Both sets of fans were separated at the station to prevent a repeat of the ugly scenes seen in recent years. 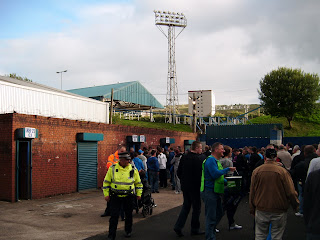 Long queues at the turnstiles. 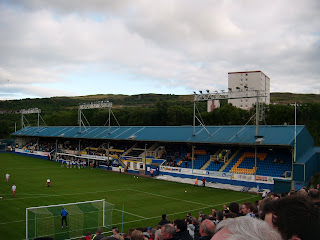 The Grandstand before kick-off. 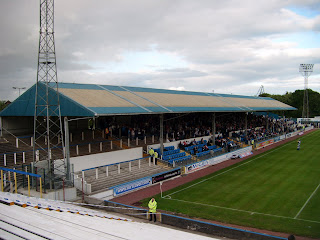 The Cowshed before the start of the game. 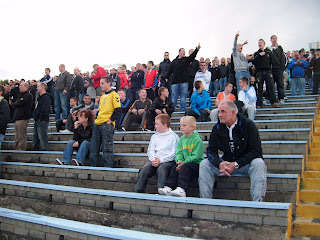 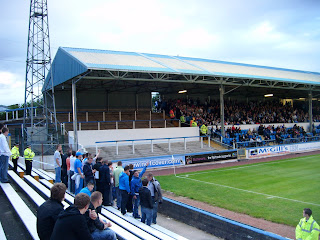 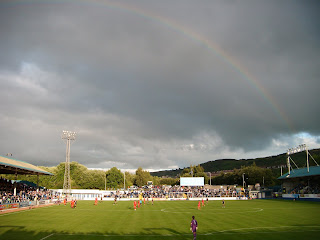 Will there be a fifth consecutive Renfrewshire Cup at the end of this rainbow? 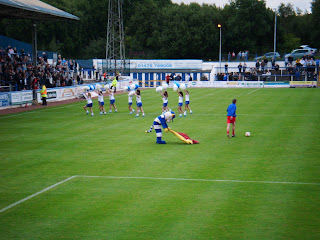 Cappie the Cat's bizarre antics...I really had no idea what he was up to. Well-nourished cheerleaders in the background. 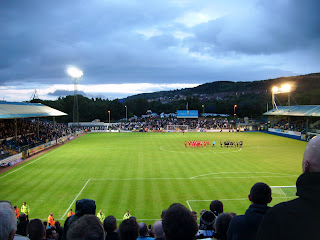 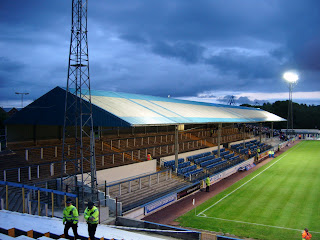 The Cowshed after the game. 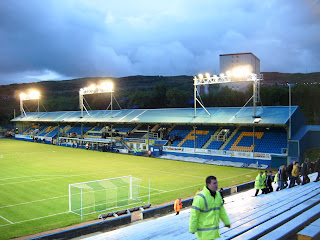 The Grandstand after the final whistle. 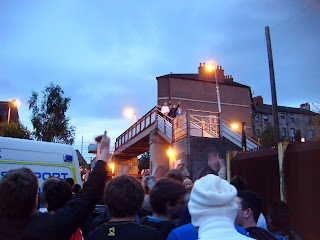 Fans were separated by the police at Cartsdyke station. Not much happened. Some Morton fan threw an egg...better than a brick I suppose, see this report from two years ago.