It has been five weeks since my last match visit and the first one of the new season is planned for next weekend (Peterhead v Montrose). Of course there was the small matter of the World Cup and the first time I saw my native Netherlands play in the final of the competition. The legendary 1974 final against hosts Germany took place two months before I was born and I am too young to remember the final against Argentina who were hosting in 1978. I was almost 14 when 'we' won the Euros in 1988 but the World Cup feels like another level.

This was not the best Oranje we had ever seen but reaching this year's final, after winning all qualifiers and the first six games at the finals, was a great achievement. On the BBC, and in other UK media, a lot was made of the 'brutal' play by Mark van Bommel and Nigel de Jong, with Alan Hansen talking about the Dutch playing in a 'cynical' way and how he was desperate for Spain to win the game after the first half. If the Dutch had won it would have been 'bad' for the game according to Hansen and Lee Dixon called the Dutch gameplan wrong as they had 'wanted [to see] an open game.' I admit that Germany v England was probably a more entertaining affair for the neutral spectator but I am glad we got put out in the final instead of the first knock-out round. 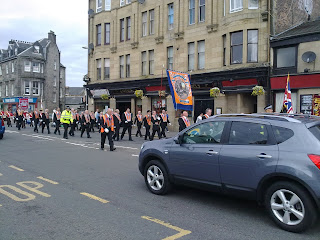 It was heartwarming to see orange-clad Scots supporting Holland in their thousands the day after the unexpected result against Brazil. Many of them were even wearing Dutch shirts showing that there is nothing sectarian about these marches as surely they all know that Catholicism is the predominant religion in the Netherlands.


However the World Cup is over now and now that we have sat through three days of 'pre-season' with Motherwell playing in a Europa League preliminary round last night, beating Breidablik of Iceland 1-0 at Fir Park, I decided to walk to Love Street after work to find out what is left of St Mirren's old stadium these days. And unfortunately it is not much that is left so I do not think I will go back to this site just to take pictures. 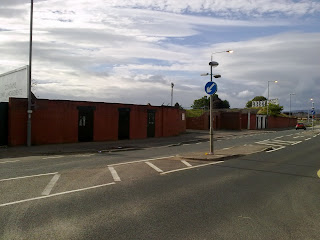 The Love Street turnstiles have not been demolished yet. 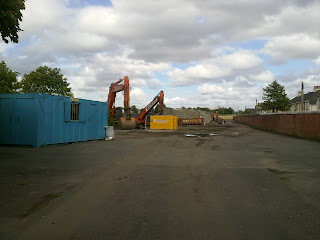 The main stand had already been demolished in February but the West (away) Stand is now completely gone as well. 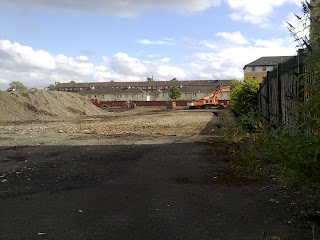 This is where the West Stand used to be. 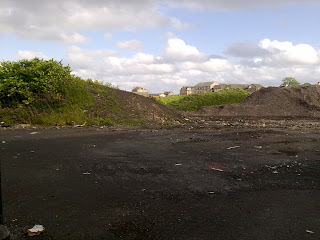 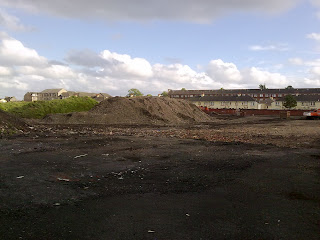 This is all making way for a housing development.
Posted by Bas at 18:19