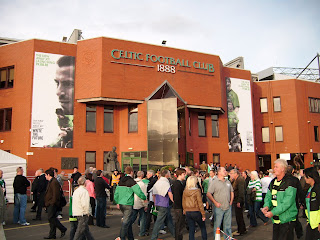 Last Thursday night I went to Celtic Park for the first UEFA Europa League encounter between Celtic and Dutch side FC Utrecht. The winner over two legs will qualify for the Europa League group stages. Celtic had been put out of the Champions' League qualifiers by S.C. Braga and were given a second chance in the Europa League. FC Utrecht qualified for Europe after finishing seventh in the Eredivisie last season, which meant 'European' play-offs which Utrecht won. One of the teams they beat in the play-offs were my team, Roda JC.

I have no special connection with either Celtic or FC Utrecht but as a follower of both Scottish and Dutch football any encounter between teams of the two countries has my attention. The match was not broadcast on television, neither in the UK nor in the Netherlands, however there was no capacity crowd. This has become a common sight at Celtic Park, which used to be filled to capacity for most league and European games up until fairly recently.

The atmosphere was good however, better than at the league games I have witnessed in Parkhead. The Utrecht fans in particular were in good form even though they became a little quieter after Efrain Juarez put Celtic ahead in the 19th minute. Georgios Samaras, who had set up the first goal, doubled the tally fifteen minutes later. FC Utrecht had some good chances at the start of the game but seemed to have too much respect for Celtic. This became particularly evident after the interval when Utrecht played like they were defending a 3-0 lead whereas I had expected them to try and nick what could have been a vital away goal. As it stands now it will be very, very difficult for the Dutch club to progress to the group stages.

On a positive note there did not seem to be any problems with hooliganism tonight. FC Utrecht's support have a bit of a reputation and in 2003 they were ordered to play their UEFA Cup first round home game against Slovak side MSK Zilina behind closed doors after their fans had caused trouble against Legia Warszawa the year before. Jan Willem van Dop, the FC Utrecht chairman, praised the travelling support's conduct in Glasgow on the official website: 'It was one big party, in the city centre and inside the ground as well,' he said. He also mentioned that everyone behaved well despite the fact that 'no extraordinary security measures had been taken.' The poor guy must have become a little out of touch as chairman of a Dutch football club for him to think that the police presence we saw on Thursday night, including a helicopter hovering over Celtic Park, is normal.

Some spice was added to this encounter by the sympathy many Utrecht fans have had for Rangers since their star striker Michael Mols moved to Ibrox in 1999. I counted a few Rangers flags and union jacks and when the game was coming to a close the travelling support were treated to a well-meant 'Go home ya huns' - the Celtic fans sang this whilst they were on their way home ten minutes before time, the Utrecht fans were kept inside the ground until long after the game. Some Celtic fans also showed their 'Pope Benedict XVI' scarves to the Dutch fans which may provoke angry reactions amongst some sections of Scottish supporters (which is probably their intention) but in a European context I find it cringe-worthy.

And finally, it was mentioned a few times in the Scottish press last week, and it was repeated in the match programme as well, that FC Utrecht are the only Dutch club outside the traditional Dutch 'top three' not to be relegated from the Eredivisie. I cannot remember Roda JC making the drop since their promotion in 1973...

For more pictures of Celtic Park see this post (v St Mirren) and this one (v AZ Alkmaar). 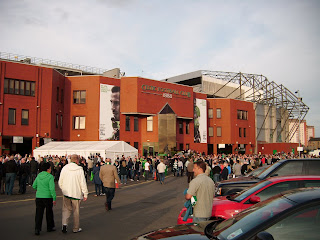 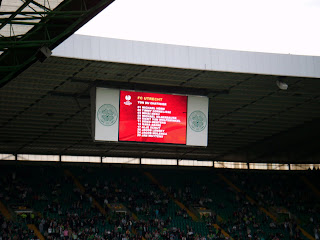 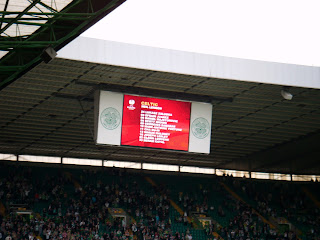 ...and the home team's starting eleven. 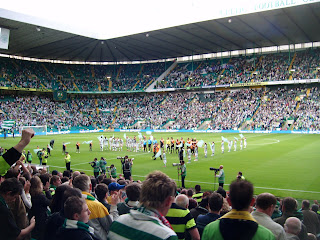 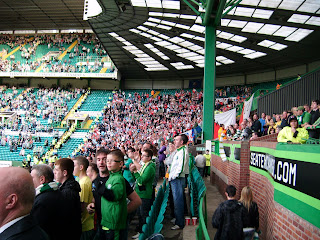 Around 1,500 Utrecht fans had travelled to Scotland. 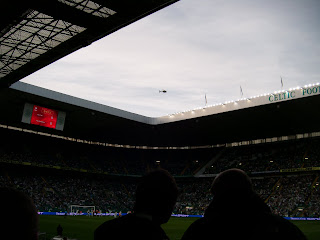 There was a large police presence including the infamous Strathclyde police helicopter. 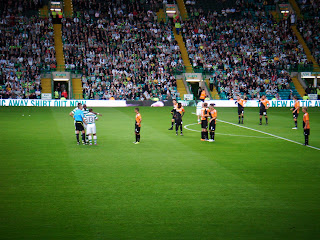 Celtic are about to take a free kick. 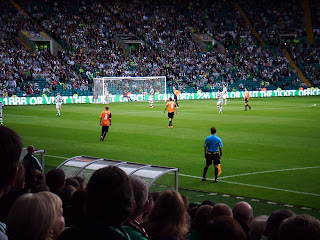 Utrecht were unable to find the net, despite several good chances. 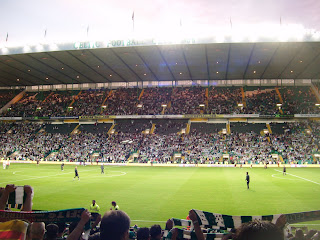 You'll Never Walk Alone at half time. The Utrecht fans joined in. 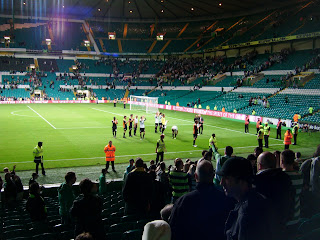 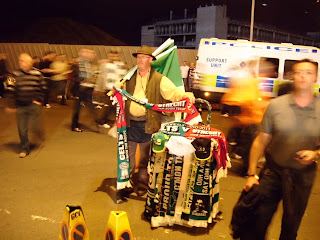 The Celtic-Utrecht 'friendship scarves' looked like a bit of a rush job. The 'Utrecht' part came with the catchy slogan 'Your text here' in Dutch. I think the makers were inspired by this custom banner.