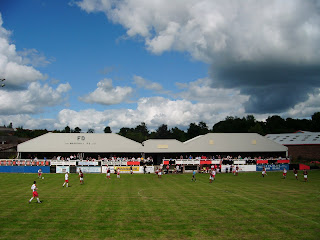 Yesterday I went to Glasgow with my wife to do a bit of shopping but I managed to see a junior game in between Primark and Matalan, with permission of course. I took a 61 bus to Maryhill in the northwest of Glasgow and got off at Lochburn Road, or more precise the stop after Lochburn Road. From what I had seen on Google Maps I expected Lochburn Park, home of junior side Maryhill FC, to be visible from Maryhill Road but it is actually hidden behind a bed store and one of the many Glasgow job centres.

Yesterday's visitors at Lochburn Park were Clydebank, who now play two divisions above Maryhill after the Hill dropped down to the Central District Second Division last season, their third consecutive relegation. In contrast, the Bankies only just missed out on promotion to the Super League Premier Division after losing the two-legged play-off against Lanark United. Today's game was for the Sectional League Cup, a competition that traditionally kick-starts the season in the junior leagues.

In the end favourites Clydebank won this season opener comfortably although there were no goals before half time. Twelve minutes after the interval Steven Dymock opened the score for the Bankies and he doubled the lead four minutes later. Play was then interrupted for a few minutes as the referee ordered the hosts to fill a hole in the pitch, a bit of a surreal sight. This unexpected break probably did not do Maryhill's concentration much good and Darian MacKinnon scored the third for Clydebank from 25 yards twenty minutes before time.

The home side were left with ten men after Scott Banks picked up his second booking but Paul McWhirter, an ex-Clydebank player, pulled one back for the Hill with twelve minutes left on the clock. Another ex-Bankie, Mark Maxwell, dashed all hopes of a late comeback four minutes before time however when he was also sent off after receiving a second yellow card. Remarkably Clydebank were still able to give away a penalty shortly before the final whistle. Fortunately for them Alan Russell was not able to convert it as Stefan Gonet saved it comfortably.

After the game I hopped on a 23 bus back to Glasgow city centre where I was happily reunited with my wife... 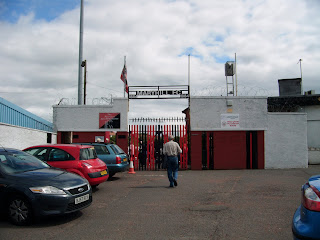 Approaching the turnstiles at Lochburn Park. 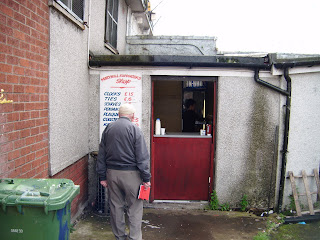 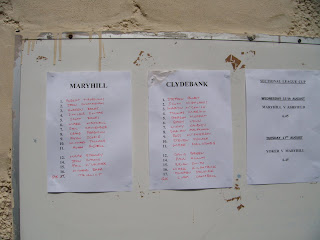 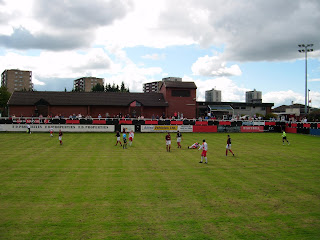 The health club and social club can be seen on the other side of the pitch. This is also one of the few junior grounds with floodlights. 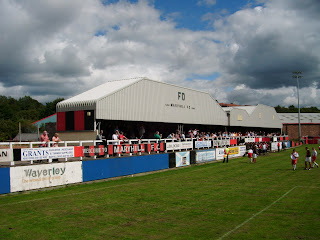 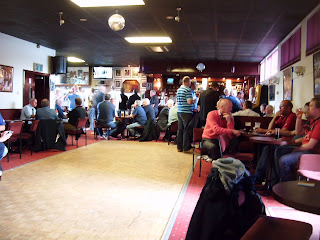 The social club at half time. 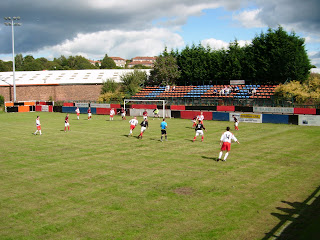 Some uncovered seats behind one of the goals. 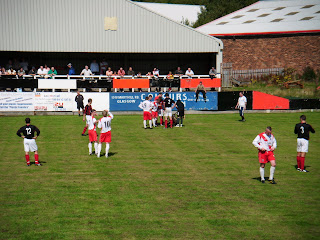 The referee spotted a hole in the pitch which took a few minutes to fill up. 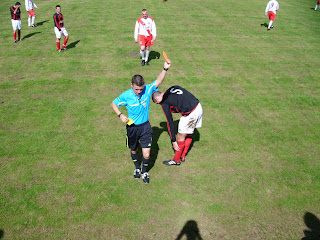 Maryhill ended the game with nine men. Scott Banks was the first player to be sent off after picking up a second booking. 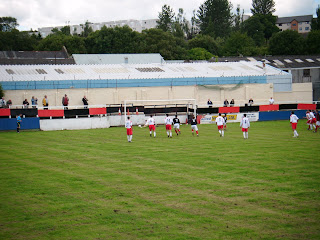