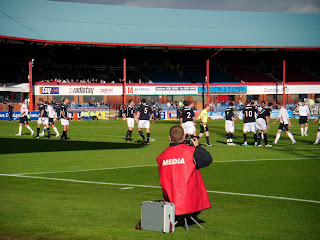 Last Saturday my wife and I took a Citylink bus to Dundee. Gail does not usually accompany me on my groundhopping trips but she had decided she wanted to come along with me to see some shops in the City of Discovery. My main purpose of this trip was my first game at Dens Park, home of Dundee FC. Dens Park has a capacity of about 12,000 and despite the modern stands behind both goals still has a traditional feel to it, more so than Tannadice. The Bobby Cox and Bob Shankly stands were built ten years ago to comply with the 10,000 seated capacity required by the SPL at the time. Both stands hold 3,000. The Main (North) Stand is unusaul in that it is chevron-shaped, the middle bit is further from the pitch than both ends of the stand. The South Stand is an old terrace converted to seating.

Dundee is of course famous for having two professional football clubs, Dundee and Dundee United, with stadiums only 150 yards apart from each other. I had visited Tannadice Park, home of United, two seasons ago but I only managed to take a few pictures of Dens Park at the time and still had to return for a Dundee home game. Dundee United have been the stronger team for a while now, regularly competing for third place in the SPL and 'best of the rest' is as good as it gets nowadays if you are neither Rangers nor Celtic. A few decades ago the Dark Blues were the more illustrious side however, having won the Scottish league in 1962 and reaching the semi-final of the European Cup the following season, having beaten 1. FC Köln, Sporting Portugal and Anderlecht before losing to AC Milan.

The last of the major domestic trophies to be won by the Dee was the 1973 Scottish League Cup, even though they were losing finalists in the 1980 League Cup Final, which was staged at Dens (the biggest of the Dundee grounds at the time) and won 3-0 by Dundee United. The Dens Park side were relegated from the top flight in 2005 after a few years of financial turmoil and have been desperate to return to the SPL ever since. Despite a higher budget than the other First Division clubs they have been unsuccessful so far and their start to the new season has not been promising either.

The previous weekend I had seen Dundee lose comprehensively to Dunfermline at East End Park and last Saturday they were playing host to league leaders Raith Rovers. The game ended goalless despite a first-half penalty, which was awarded to the men from Kirkcaldy after Milan Misun had fouled Gregory Tade in the box. John Baird's spot-kick was saved by former Celtic goalie Rab Douglas. After the interval Dundee looked the stronger side but they could not find the net. The result meant Dunfermline are now top of the First Division, seven points above Dundee. 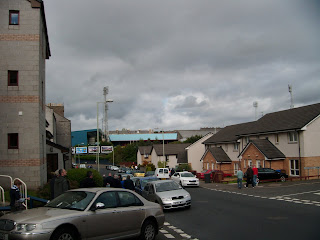 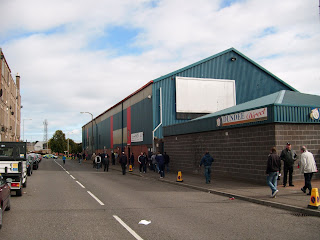 The Main (North) Stand. Tannadice can be seen in the background. 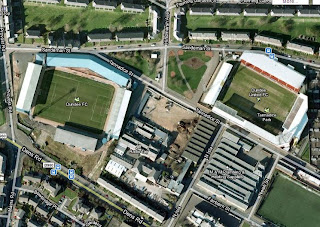 Taken from Google Maps: only about 150 yards between both grounds. You can also see the odd shape of the Main Stand at Dens Park. 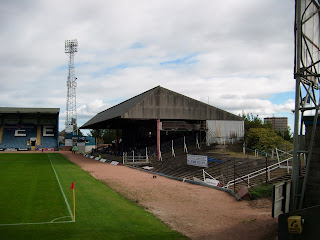 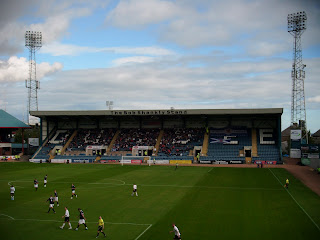 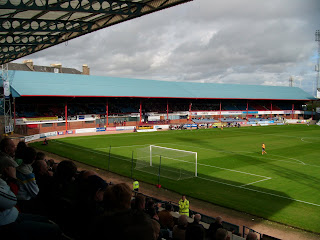 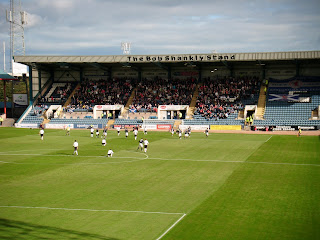 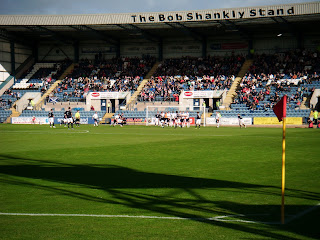 Dundee were not able to find the net either. 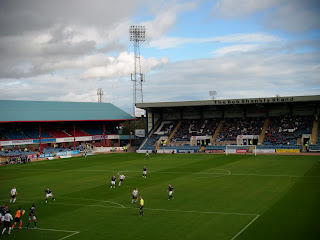 Tannadice floodlights in the background. 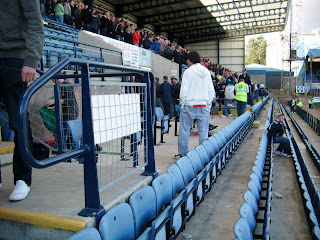 The Bobby Cox Stand after the game. 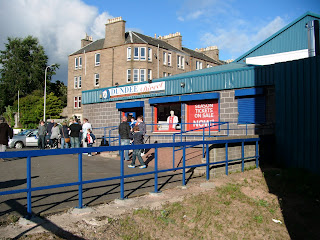