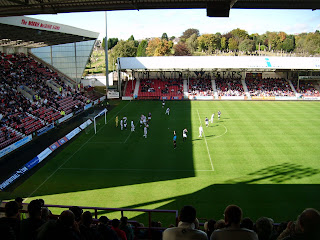 Today I went to Fife to see Dunfermline take on Dundee at East End Park. I had planned to take the 1:10pm X26 Stagecoach bus from Glasgow Buchanan bus station to Dunfermline bus station but the bus never showed up so I took the X24, which was also late and it left Glasgow at 1:40pm. I knew I was going to struggle to make kick-off now and the bus arrived in Dunfermline at 2:45pm. Had I not been looking for a programme seller outside East End Park I would have been inside the stadium by 3pm however as it happens I was two minutes late and unfortunately still without a programme!

This was my first game at East End Park. I had taken some pictures outside the ground last season (when the Pars were also playing Dundee) but I had to come back in my quest to visit a home game at all 42 Scottish league grounds. Dunfermline were relegated to the First Division in 2007 and with its 12,500 capacity East End Park was fully compliant with the old SPL requirements. The ground has a modern look to it with fairly new 3,000-capacity one-tier stands behind the goals but the 1960s Main Stand gives it a bit of character as well. A drawback of the two-tier Main Stand is the large pillar in the centre of the stand which can obstruct your view quite a bit.

The Pars moved to within a point of First Division leaders Raith Rovers today with a convincing victory over Dundee. The home side were awarded a penalty when Nicholas Riley fouled Joe Cardle. Willie Gibson converted and the Fifers were 1-0 up. Steven Bell then made it 2-0 only minutes before the half-time whistle. After the interval Dundee pulled one back when Gary Harkins headed home but Pat Clarke made sure the three points stayed in the Kingdom when he scored 3-1.

For the pictures I took around East End Park last season see this post. 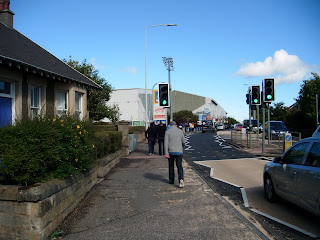 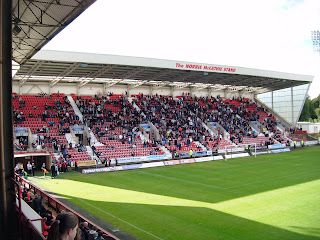 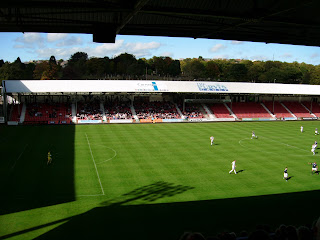 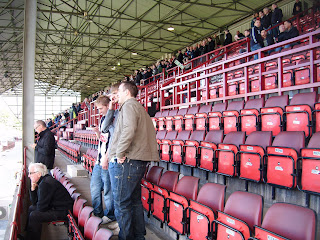 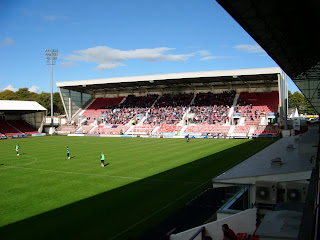 The Dundee fans were housed in the East Stand. 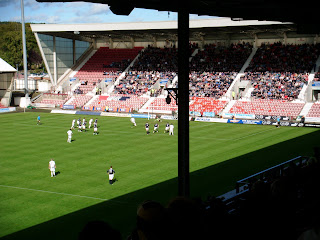 Willie Gibson's penalty meant Dunfermline were 1-0 up. Note the large pillar, which restricts the view of almost everyone seated in the Main Stand.