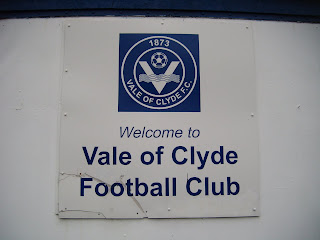 Yesterday I took in another junior game, this time it was Vale of Clyde v Clydebank at Fullarton Park in Tollcross, Glasgow. Despite the relatively short distance from my home in Paisley to the East End of Glasgow I somehow managed to get inside the ground 17 minutes late. I had taken a number 9 First bus to Glasgow City Centre where I hopped onto the number 61 First bus to Shettleston but I never thought the three-mile journey would take as long as it did. There seemed to be a bus stop every 50 metres with people getting on and off at every stop. It was however only a very short walk from my eventual stop on Tollcross Road to Fullarton Park.

Unfortunately I still had to pay the full five quid to get in, I had hoped there would not be anyone at the gate anymore, but I could not complain of course. Fortunately I had not missed any goals. The ground is not the most impressive of the junior grounds I have been to but it seemed very well looked after. There is terracing along one side and a roof over a grass bank on the other side. There is also a welcoming social club and I had an excellent bridie (£1) and a bottle of Miller (£1.50).

The two teams played with passion and referee Steven Reid handed out eight yellow cards. Both sets of supporters were not happy with the referee's performance and the level of abuse hurled at the poor guy makes you wonder why anyone still wants to be a referee at this level. Stevie Dallas opened the score for the Bankies just before the interval. Robert Coulter scored the deserved equaliser ten minutes before time. 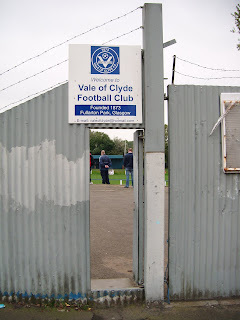 The entrance to Fullarton Park. 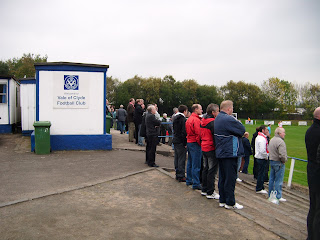 Terracing and the club buildings. 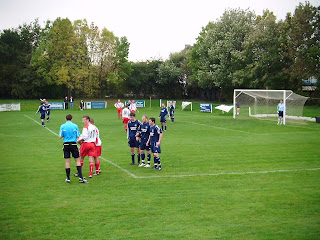 Clydebank are getting ready to take a free kick. 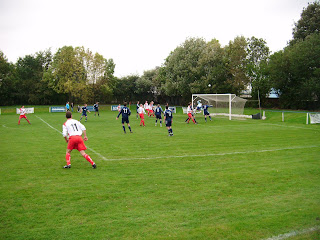 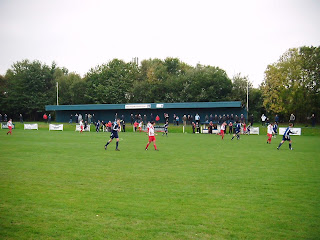 The grass bank on one side is partially covered. 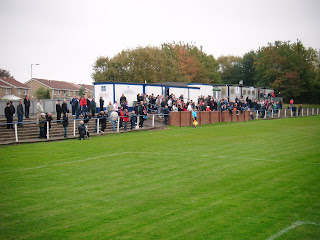 There is terracing on the other side however. The dressing rooms (left) and social club (right) are behind the terraces. 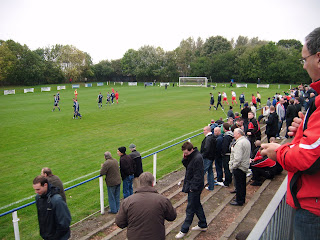 Clydebank started the second half leading 1-0. 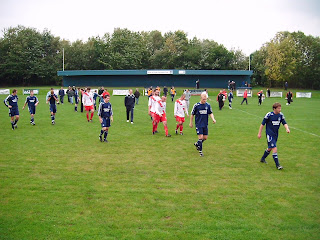 However the game ended in a 1-1 draw.