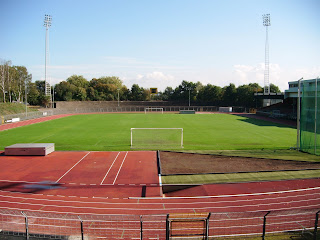 I was visiting my parents in the Netherlands last weekend and decided to take some pictures of Gemeentelijk Sportpark (=Municipal Sports Ground) Kaalheide. Fortunately the gate was open and I could walk into the ground without any problems.
Gemeentelijk Sportpark Kaalheide was opened in 1950 and was Roda JC's home ground until 2000 when the Pride of the South moved to the 19,600 capacity all-seater Parkstad Limburg Stadion. It is situated in the town of Kerkrade, a small town in the most southern part of the Netherlands near the German border, only 6 miles from the German city of Aachen.

Roda JC were only founded in 1962, the result of the merger of Roda Sport and Rapid JC. In 1973 Roda JC were promoted to the Dutch top flight, the Eredivisie, and they have never been relegated since, although it took a penalty shoot-out win in the play-off finals at Cambuur Leeuwarden in 2009 to secure a slot in the Eredivisie for last season.

I started visiting Kaalheide during the 1994/95 season. Roda were at their best at that time. They only lost two league games in the whole season and finished the season in runner-up spot behind European champions Ajax. For the 1995/96 season I bought my first season ticket and I remained a season ticket holder until I moved to Scotland in 2001.

Kaalheide was built as a multi-functional stadium and was (and still is) used as an athletics venue as well. This was a common concept in the Netherlands, and the rest of the continent for that matter. The running track around the pitch ensured that the terraces behind the goals were a fair distance from the pitch and this, combined with the fact that these terraces were uncovered, contributed to a widespread dislike of them by both home and away supporters. Luckily the home supporters had an alternative. 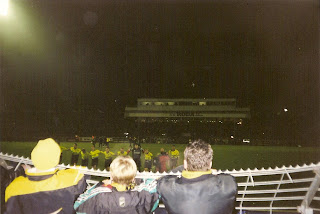 The picture above was taken in either November or December 1998 from the North Terrace, a roofed terrace where the more fanatical supporters used to congregate. It looks like Roda won and my guess is that this was the derby against MVV of Maastricht on 27th November 1998 (2-1). The Main Stand, which was renovated as late as 1992 can be seen in the background. The two ends behind the goals were not covered and these terraces were generally not very popular. Away supporters were allocated one half of the West Terrace until the late nineties. Later the away fans were moved to the East Terrace to make it easier to segregate the opposing supporters' groups outside the ground.

The official capacity changed over the years and was considered to be around 15-16,000 in the late nineties however sell-outs have always been rare at Kaalheide. A record crowd of 23,000 saw Roda JC lose to Anderlecht (2-3) in the second leg of the first round of the UEFA Cup on 26 September 1976 (3-5 aggregate). This is still a record for a Roda home game.

Unlike many other older stadiums in the Netherlands Kaalheide is still in use, both as an athletics venue and as a football ground: it is Roda's training ground and the reserve team play their games at Kaalheide. The North Stand was however demolished in 2005 because it had fallen into disrepair and was in danger of collapsing. 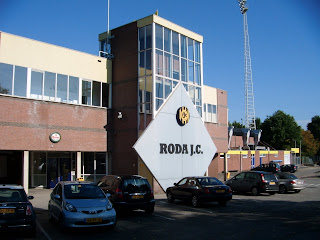 The Main Stand was renovated as recently as 1992. 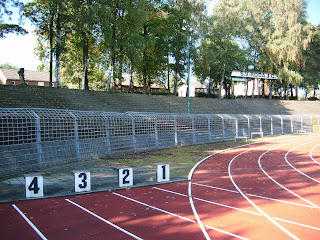 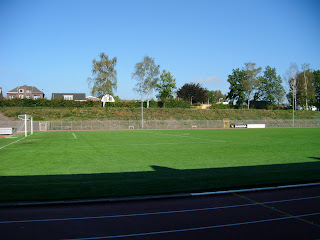 The roofed terrace which ran along the nothern side of the pitch was demolished in 2005. 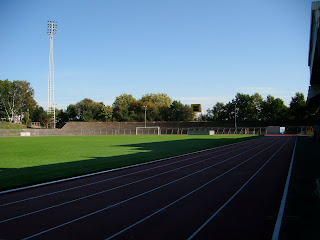 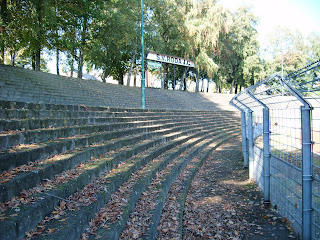 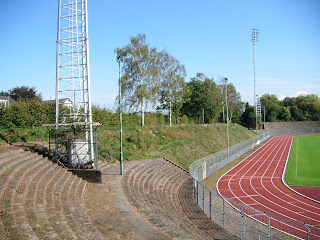 The grass bank that replaced the old North Terrace. 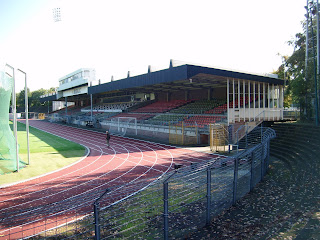 The Main Stand seen from the West Terrace. 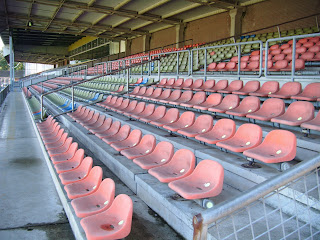 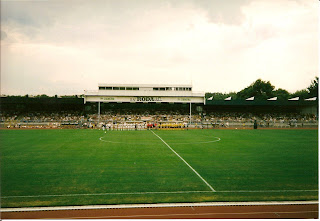 These two pictures I took when Roda were still playing at Kaalheide around 1999 or 2000... 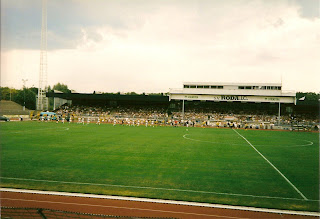