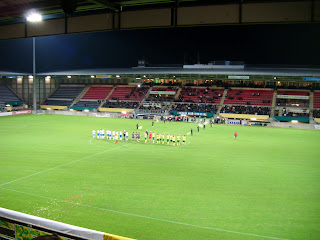 Last Friday I witnessed Fortuna Sittard's first win of the season in the Jupiler League, the second tier in Dutch professional football. The opponents were Cambuur Leeuwarden, who will still be considered one of the favourites for promotion to the Eredivisie but whose form has been somewhat indifferent so far.

I was in the Netherlands for a few days, mainly to visit Excelsior v Roda JC in Rotterdam on Saturday night, and I had decided to pay my first visit to Fortuna's ground for about 10 years on the Friday night before. Sittard is only about 15 minutes on the train from Heerlen, where I was staying at my parents', and the Trendwork Arena, as it is now called for sponsorship reasons, is a 20-minute walk from the train station. The ground was opened in 1999 and has a capacity of 12,500. Despite Fortuna's woes there were still about 3,000 supporters in attendance. These were all home fans as the visiting team had not brought any supporters with them.

The last time I had paid a visit to what was then called the Wagner & Partners Stadion I was there as a Roda supporter visiting our biggest rivals (together with MVV of nearby Maastricht). This was on Wednesday 31st January 2001, only six days before I left for Scotland. Fortuna were an established Eredivisie side and won 1-0 on the night.

In 1968 Fortuna '54 of Geleen and Sittardia merged as 'Fortuna Sittardia Combinatie', which later became 'Fortuna Sittard'. In 1984 Fortuna reached the final of the Dutch Cup against Feyenoord, which the Rotterdam side won 1-0. As Feyenoord won the league as well in 1984 Fortuna were allowed to compete in the Cup Winners' Cup and reached the quarter finals in which eventual winners Everton proved too strong (5-0 over two legs). In the late nineties Fortuna had a well-respected team with young and talented players like Mark van Bommel, Kevin Hofland, Fernando Ricksen and Wilfried Bouma. The manager was current Holland manager Bert van Marwijk and the men from Sittard reached the Dutch Cup final for the second time in 1999, in which they were unsuccessful once more as Ajax won 2-0. In 2002 Fortuna were relegated to the First Division where they have been struggling ever since. It is actually a miracle that the club still exist. The proposed merger with Roda JC in 2009, which was extremely unpopular with both sets of supporters, only fell through when it was in the final stages. Any celebrations from Fortuna fans were short-lived as the KNVB, the Dutch FA, decided not give the club a licence for the 2009/10 season because of alleged financial mismanagement. However Fortuna argued against this decision in court and the judge ruled that the KNVB had made serious procedural mistakes when they decided not to grant Fortuna a licence and therefore they were allowed to continue playing professional football in 2009/10.

Of course this was not the end of Fortuna's problems. They were struggling in the league again last year and even though they had already finished bottom of the league for three successive seasons there is now the possibility of relegation from the Jupiler League, for the first time in decades, to the Topklasse, a newly-formed league comparable to the English Conference, which is meant to work as a bridge between the amateur and professional leagues. Fortuna had only managed one draw before last Friday, and had started the season on minus-two points because the KNVB were again not happy with the club's financial management.

Seen in this light the celebrations after the final whistle on Friday were totally understandable. Fortuna looked quite a confident side for a team that had not won this season yet and defender Rick Geenen scored after only ten minutes. Danny Guijt scored the equaliser in the second half but it was Geenen's second goal of the night that handed Fortuna the full three points. 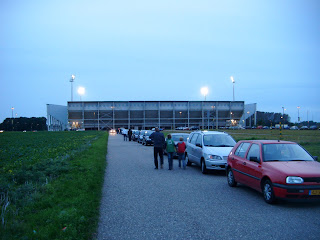 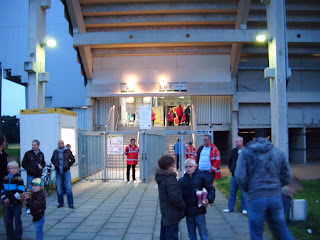 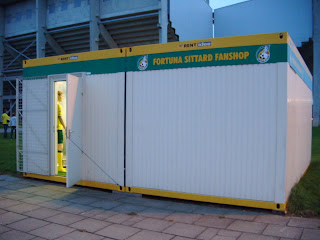 The club shop did not look very inviting. I had not planned to buy a Fortuna scarf anyway... 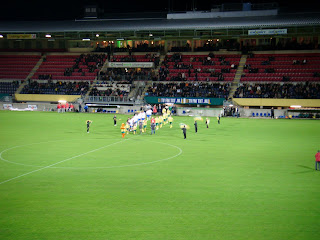 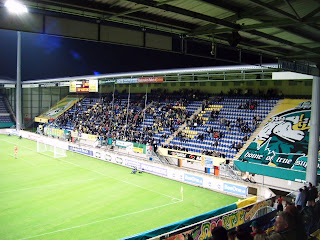 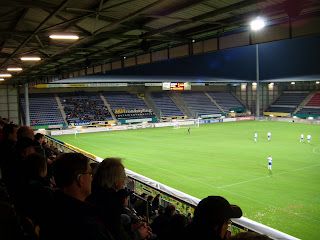 The 'Z Side' housed some school children. The away section on the right was not in use tonight, as apparently not one single Cambuur supporter could be bothered making the long journey south. 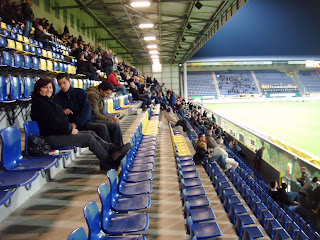 I took my seat in Section C, I do not think the actual stand has a name. 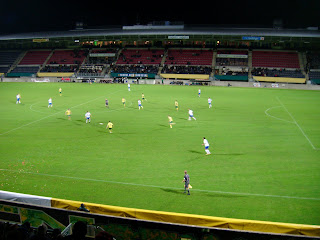 The Hoofdtribune or Main Stand. 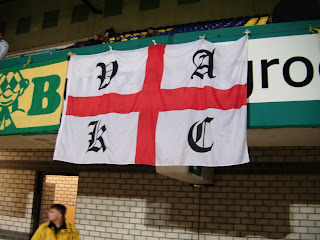 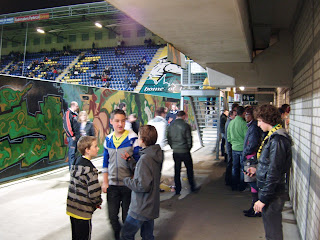 Under the stand at half-time.