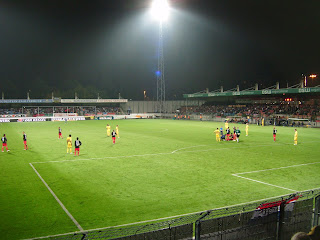 Whilst visiting the Netherlands I saw my first game at Stadion Woudestein last Saturday. I went as an away fan as my team Roda JC were playing Excelsior, currently two points ahead of 'big brother' Feyenoord and with Sparta plying their trade in the Jupiler League they currently are the highest ranked team in Rotterdam. Still, they are the least popular of the three professional sides in Holland's second largest city. Woudestein has a capacity of only 3,500, making it by far the smallest stadium in the Dutch top flight. Despite its small capacity the ground was not sold out last Saturday with only 3,214 in attendance despite the club's promising start to the season, including a 3-2 defeat of Feyenoord. Predicted by many as 'certs' for relegation they are currently lying twelfth in the 18-team Eredivisie.

Excelsior do not have a fan base that justifies their place in the Eredivisie. Founded in 1902 they are one of the older professional sides in the Netherlands. Although Excelsior and Feyenoord had cooperated for many years their partnership became official in 1996 when Excelsior became a feeder club for Feyenoord. Feyenoord stalled young and talented players at the Woudestein club to give them valuable playing minutes in the Dutch second tier. Although the agreement between the two Rotterdam clubs was controversial amongst many supporters the club were promoted to the Eredivisie in 2002. They were relegated again the following season but were promoted once more in 2006. This time their stay in the top league lasted two seasons and Feyenoord ended the partnership in 2008. However only five months later the two Rotterdam clubs agreed on an even more extensive partnership and Excelsior were promoted to the top tier once more last season.

This was my first Roda JC league game in almost four years I am ashamed to admit but I had been looking forward to this one for a while. Roda have started this season extremely well; they have not been playing glorious football on a weekly basis but they have kept on grinding out results, just like last Saturday. The team from Kerkrade were the dominant side in the first half but Wouter Gudde opened the score for Excelsior after some shambolic Roda defending. Pa-Modou Kah equalised early in the second half and a draw looked like a fair result. However Anouar Adouir sealed another win for Roda in the 88th minute to the delight of the travelling fans.

I made the journey to Woudestein on a supporters bus, which is my preferred method of travel to away games in the Netherlands because it is cheap (€30 for non-members including match ticket) and relatively comfortable and the atmosphere is always top-notch. The bus left from the Roda ground in Kerkrade at around 5pm. After journey of just over three hours we arrived at Stadion Woudestein. As mentioned above, the stadium is very small but I was pleasantly surprised to see terracing in the away end. The journey back to Kerkrade went slightly quicker and I arrived back at my parents’ house on Sunday morning just after 2am. 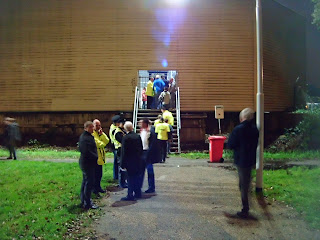 The not so impressive entrance to the away stand. 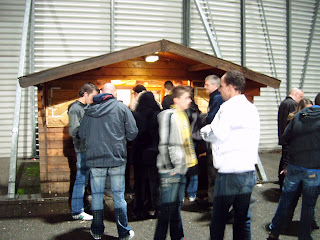 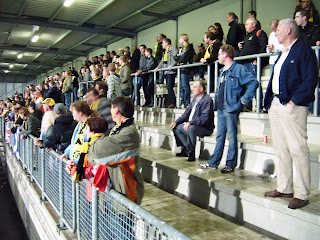 I was pleasantly surprised to see these terraces in the away end. 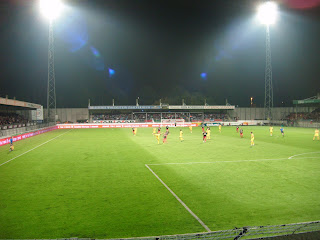 The Zuidtribune or South Stand. 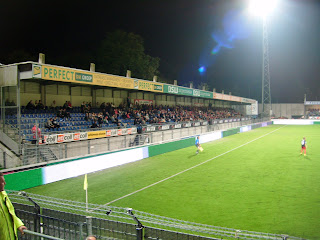 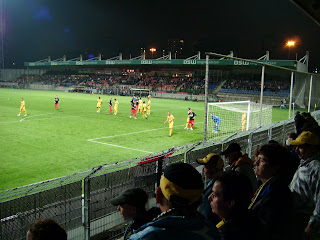 The main stand is called the Henk Zon Tribune. 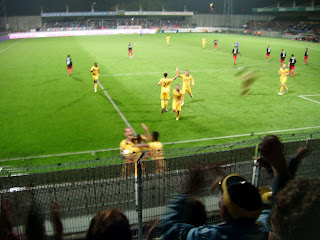 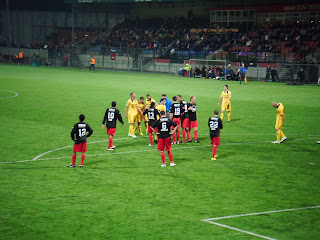 Roda kept on searching for the winning goal which finally came in the 88th minute. 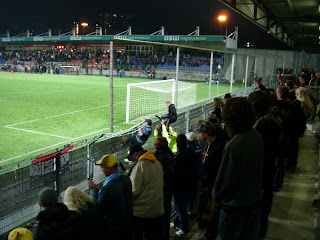 'Get off that fence you naughty boy!' 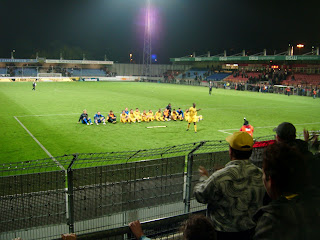 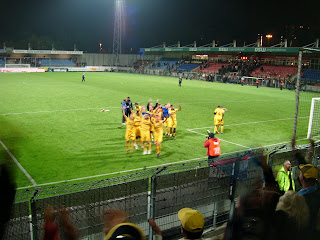