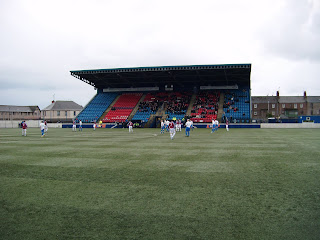 Yesterday I went to Montrose for the third round Scottish Cup tie between SFL Third Division side Montrose and Whitehill Welfare from the East of Scotland League. I made use of the Sunday Mail offer (a return ticket to any destination in Scotland for a fiver with Citylink) and took a Citylink bus from Glasgow to Dundee. In Dundee I got on a train and arrived in the town of Montrose 30 minutes later. I was in Montrose last year but unfortunately did not get to see any football then as the league game against Queen's Park was postponed due to high winds. Because of the rainfall during the last few days I was afraid another cancellation was a possibility. I had checked all websites and phoned the club and the game was definitely on. After entering Links Park I realised that the pitch is artificial and there had not been much risk of it being waterlogged!

Thanks to the few hours I had spent in Montrose last year I knew the town and its pubs a little and, just like last year, I had a couple of pints in the Picture House, a large Wetherspoon-esque pub in Hume Street, near the train station. From the station it is a short walk, less than ten minutes, to Links Park.

Montrose's ground is dominated by the large main stand (1,300 seats). There is also a covered terrace behind one of the goals. Behind the opposite goal there is a small uncovered terrace and there is room for standing on the side opposite the main stand as well. Due to its proximity to the North Sea it can get very chilly inside the stadium.

Despite being the underdogs on the day Whitehill found the back of the net after only seven minutes as Jordan Hall scored with a 35-yard strike. Paul Tosh equalised from the penalty spot after he was fouled by William Kidd. The big turning point came after Whitehill's Alan Cornett was sent off for handling in the area and Tosh converted another penalty. After the interval, the East of Scotland League side put in a brave performance even though they were a man short. However, Gordon Pope's goal fifteen minutes before time drove the final nail in the coffin for the men from Rosewell. No doubt the Gable Endies will be hoping for a money spinner when their name is pulled out of the hat along with the SPL sides tomorrow. 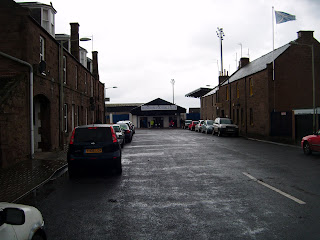 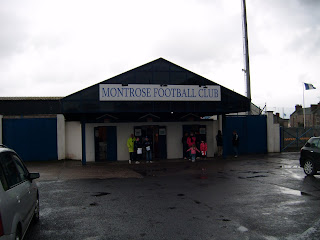 The entrance to the ground. 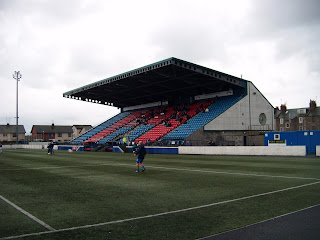 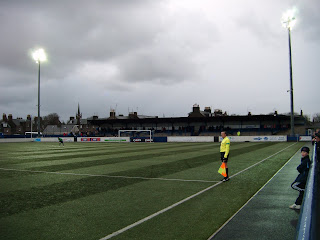 The covered terrace behind one of the goals. 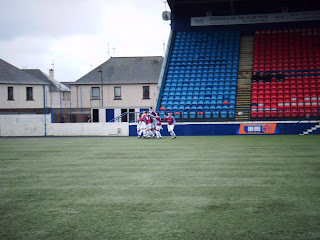 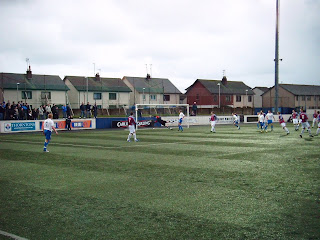 Montrose were looking for the equaliser. This effort went just wide. 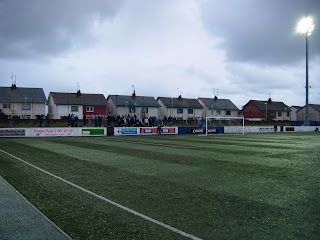 Despite the rain there was a group of vocal Montrose supporters on the small terrace behind the other goal. They moved to the other end for the second half. 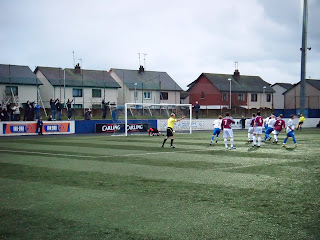 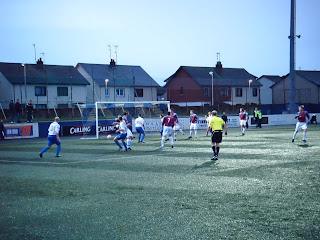 The pressure on the Whitehill defence continued. 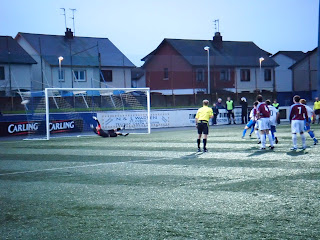 Paul Tosh converted a second penalty for the Gable Endies. 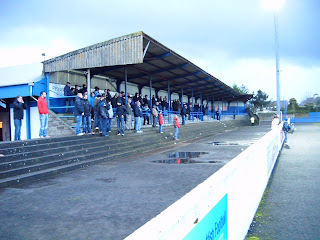 A closer look at the covered terrace. 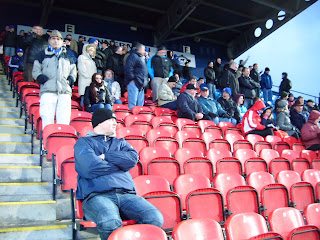 And a closer look at the main stand as well.