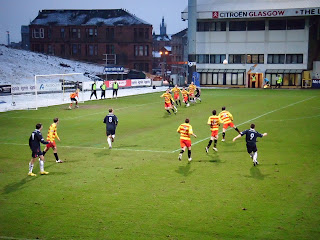 Fore more pictures of the Jags at Firhill see this post and for pictures of a Glasgow Warriors rugby game at this ground see this one.
On 26th December I saw my first match in over five weeks at Firhill in the north of Glasgow. Partick Thistle were playing host to Raith Rovers in the the Scottish First Division. Before the arctic weather struck I had made all kinds of plans for Boxing Day. I had considered paying my first visit to Glebe Park to see Brechin City v Ayr United. I had also though about going to Blackburn where Stoke City were visiting Ewood Park. I only discovered last week however that there were no trains on 26th December apart from a few local lines in Glasgow. This meant that my options had become extremely limited. I could have taken a train to Airdrie, I still have to see a game at the Excelsior Stadium, but the Second Division clash against East Fife had fallen victim to the weather. Hibernian were playing Aberdeen at Easter Road and I have not seen the new East Stand yet but there were no trains to Edinburgh today and I did not feel like taking the Citylink bus. Celtic v St Johnstone did not look like the most attractive fixture to me and I had not expected tickets to be on sale on match day for Motherwell v Rangers at Fir Park.

Firhill therefore seemed the easiest option. This was also the first time I took pictures at a football match at the home of the Jags and the first time I have seen Partick Thistle play at home since 2003. Of the four senior teams in Glasgow Partick Thistle's ground is the closest to the city centre, a fifteen-minute walk from Sauchiehall Street. This short walk was a particularly treacherous one yesterday because the pavements were extremely slippery and a few times I was very close to falling flat on my face. Luckily however I made it to the stadium in one piece. I bought a programme and a match ticket (which you have to buy at the ticket booth outside the ground and hand in at the turnstile) and took my seat in the Jackie Husband Stand. This was the only stand open today. As far as I know away fans are usually allocated the North Stand but today the supporters from Kirkcaldy were seated in the northern end of the Jackie Husband Stand. Although I understand that it is cheaper to have only one stand open it does not do much for the atmosphere.

The match was not the most exciting one I had seen in 2010 and there were no goals. Both teams had a few chances and a draw was a fair result but I would have preferred a 1-1 or 2-2. After the game I made my way back to Glasgow Central train station on foot but black ice had made it an extremely treacherous journey. Nevertheless, as always, I made it home in one piece. 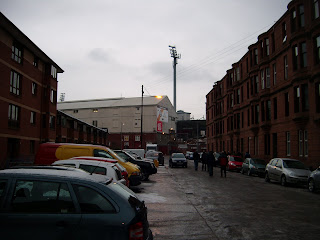 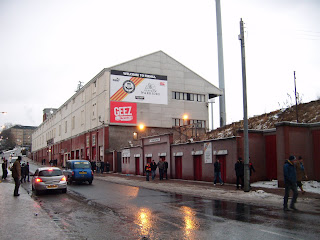 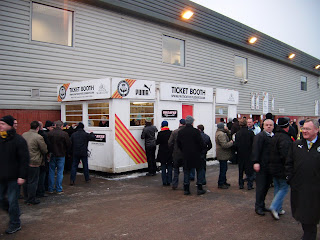 First you have to buy a ticket from the ticket booth outside the Jackie Husband Stand, which you then hand in at the turnstile. 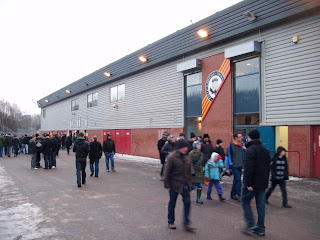 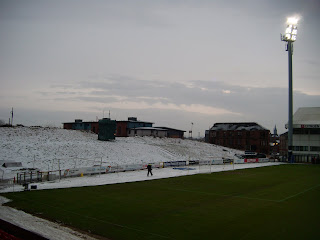 This used to be the South Terrace. 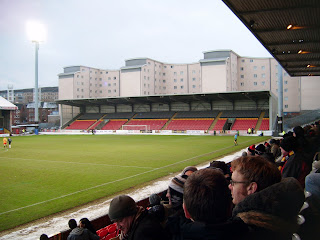 The North Stand was closed today. Away fans were seated in the Jackie Husband Stand. 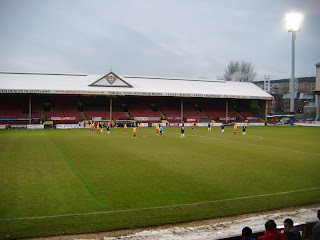 The Main Stand was closed as well. 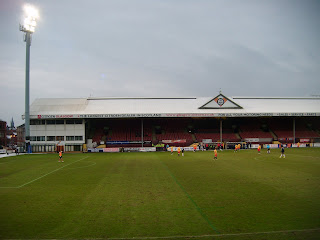 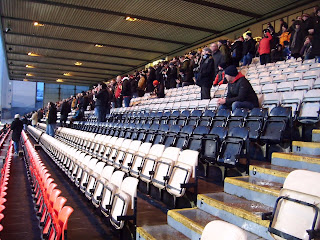 The Jackie Husband Stand at half time.