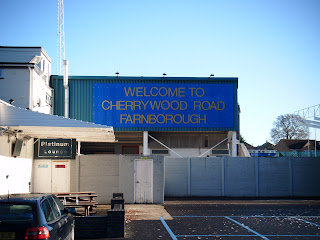 These pictures of Rushmoor Stadium (formerly Cherrywood Road) I took two weeks ago when my wife and I spent four nights in the south of England for the Lakeside World Darts in Frimley Green, Surrey. Last year we stayed in nearby Frimley and I took a bus to Aldershot to take some pictures of the EBB Stadium (formerly Recreation Ground), home of League Two side Aldershot Town FC. I had to wade through 15 inches of snow to take a few shots of the exterior of the ground as there was, unsurprisingly, no way to get inside without being classed as a trespasser.

I had thought about going to Aldershot once more but it would probably have been more of the same (minus the snow) and I had found out in the meanwhile that there was a newly promoted Blue Square South team, in the shape of Farnborough FC, that plied their trade in the vicinity. On the Saturday morning I walked to the ground from our hotel in Frimley Green, which took me about 45 minutes. Unfortunately, I was once again unable to get inside the ground. Therefore once more some exterior shots. The record attendance at Rushmoor Stadium is 3,581 (an FA Cup game against Brentford in 1995). I am not sure what the current capacity is, Wikipedia gives a figure of 4,200, however a new stand is under construction now as you can see in the pictures as well. 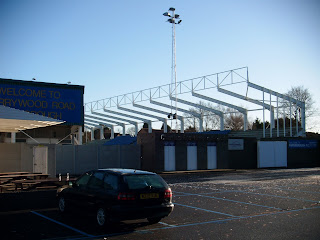 The Prospect Road End Stand is currently under construction. 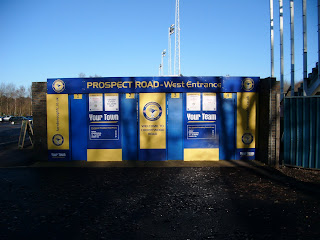 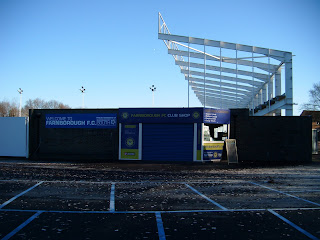 The Farnborough club shop and the new PRE Stand. 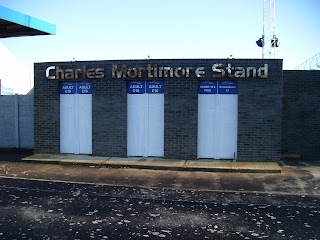 Turnstiles leading to the Charles Mortimore Stand, the main stand. 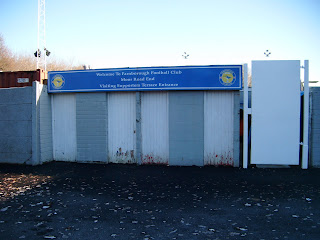 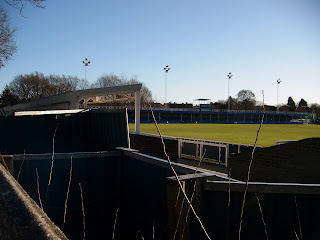 I was able to look over a crumbling concrete wall behind the Moor Road End. We are looking out on the East Stand here. 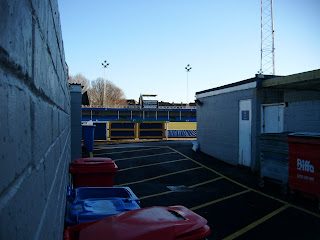 Once more the East Stand, this time a frontal view. 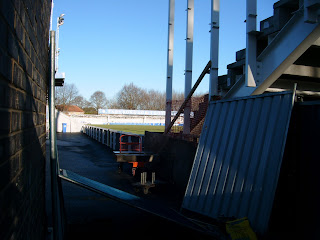 Finally we are looking out on the Moor Road End from behind the Prospect Road End.
Posted by Bas at 19:04