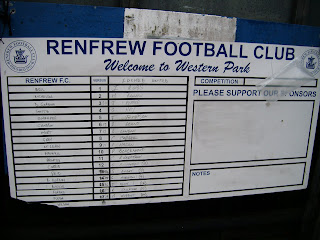 Last Saturday I saw a match at a 'new' ground for the first time in almost two months. Renfrew FC (currently fifth in the West Region First Division) were playing host to Dundee club Lochee United (fourth in the East Region Superleague) in the third round of the Scottish Junior Cup. This was a game that was supposed to have been played on 27th November but had been postponed several times because of the arctic weather. Saturday's game looked doubtful as well because of the torrential rain we had seen in this part of Scotland in the past few days . Luckily however the match was given the green light after a morning pitch inspection. The actual journey to the ground was one of the less exciting ones as Renfrew is situated only a couple of miles from Paisley and my wife dropped me off outside the ground (I took one of the many buses back to Paisley after the game).

Despite the importance of this game I counted only about 150 supporters, which was understandable considering the horrible weather today. Still, a couple of dozen diehards had made their way from Dundee. Fortunately the terrace behind the southern end is covered and, despite a few leaks, kept everyone reasonably dry. Apart from the large enclosure there is not much too say about this ground. There are some overgrown, and very steep, terraces on the eastern side of the ground however because of the weather I did not venture too far away from the enclosure. Also there is no pie stand so I was not able to buy any refreshments within the ground which was a first for me in the juniors. I had read on the Lochee United site that there were some problems with burst pipes at Western Park so I do not know if you are normally able to buy a pie or a coffee inside the ground. Apparently Renfrew are hoping to move to a new ground near Blythswood Retail Park in 2012. Surprisingly however a programme was sold today, a decent effort at £1.

Despite the horrendous weather I did not regret leaving the house because I was rewarded with an entertaining cup tie. Lochee United confirmed their status as favourites to reach the fourth round by taking the leas quickly. Paul Blackwood and Grant Lawson ensured the Bluebells were 2-0 up after only 13 minutes and I am sure many in attendance at Western Park feared the worst for Renfrew but somehow they pulled one back just before half-time and when Lochee defender Joe Pepper was sent off things started to look rosier for the West Region outfit. Despite playing with only 10 men the East Region side seemed to be able to hang on to the slim lead reasonably comfortably however, until Renfrew equalised in they dying minutes. This means both teams will have to do it all over again in the replay in Dundee this Saturday. 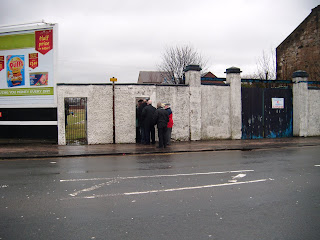 The entrance to Western Park. 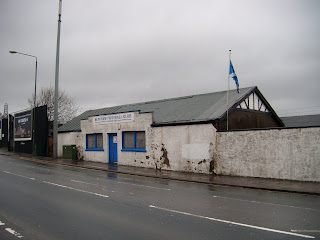 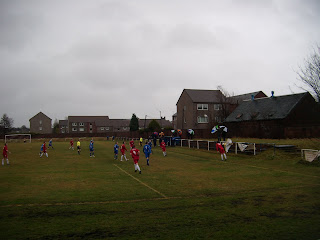 Watch the umbrellas, it was not a nice day to go to the football. 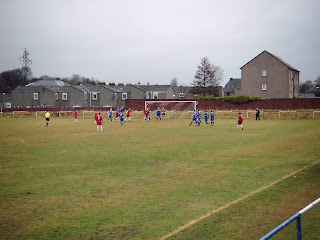 Only a grass bank at the northern end. 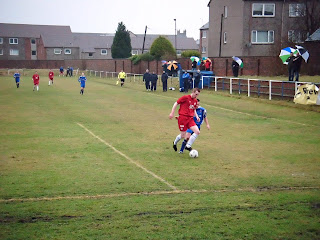 Despite the sending-off Lochee seemed to hang on to their lead quite comfortably... 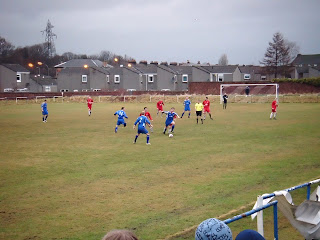 ...but both teams will have to meet again this Saturday. 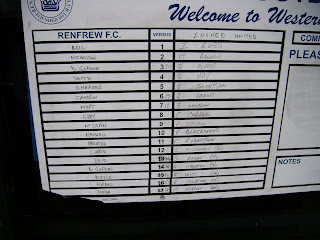 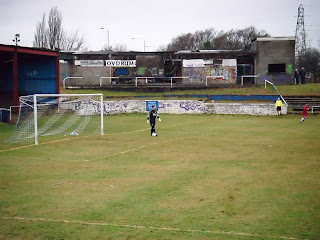 The club buildings are in a very poor state. 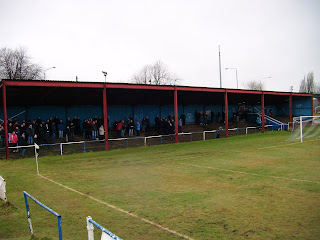