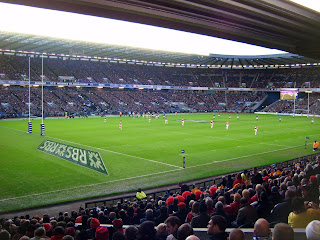 A non-football post this weekend as my wife and I went to Edinburgh last Saturday to see the Scottish rugby union team play their first home game of the 2011 Six Nations Championship. Scotland were beaten 34-21 by France in their previous game but the three tries they scored against one of the usual favourites had led to some optimism in the Scotland camp. From what we witnessed against Wales however it had been another false dawn, one of many I have seen in the ten years that I have followed Scottish rugby.

The home game against Wales is my favourite of the Six Nations fixtures, because of the size of the Welsh travelling support, the atmosphere they create in Edinburgh and the idea that Scotland have a good chance of winning it although the Welsh have beaten Scotland many times in the past decade.

My wife and I had booked a room in the Apex European Hotel, which is situated conveniently close to both Murrayfield and Haymarket railway station. After getting off the train at Haymarket we dropped off our bag at the hotel and hopped on a bus to the city centre. Our first port of call, as always, was Tiles Cafe Bar, where we had a few drinks and lunch as well. We also watched Wayne Rooney score that goal against Man City and discovered that apparently everyone in Wales is a Man Utd fan. After a few Leffes we walked to George Street where we made a stop at the new JD Wetherspoon pub, the Alexander Graham Bell, before we headed for the stadium. We passed our hotel on our way to the ground so we decided to check in quickly and we found that our bag was already in our room. We were in our seats at Murrayfield just in time for kick-off.

The game itself was disappointing with a Shane Williams try giving Wales an early lead and Scotland never looking like they were able to win this match. A saving grace was our seats near the aisle and exit which made it easy to go and buy a beer now and then without missing too much of the action. The sale of alcohol is banned in all football stadiums in Scotland but the ban was lifted in other sports grounds such as Murrayfield a few years ago. In the last few years poor organisation leading to ridiculous queues at the various bars made it sound like a good idea in theory only. However this year the SRU finally got their act together and it only took a few minutes to buy a bottle of Carling (no Leffes unfortunately). Will we ever be able to buy a beer at Ibrox or Celtic Park? I cannot see it happening any time soon.

After a depressing 24-6 defeat we drowned our sorrows in the hotel bar but we will be back in good spirits again next weekend for the game against Ireland. We will have the same seats but there will be no overnight stay on 27th February. 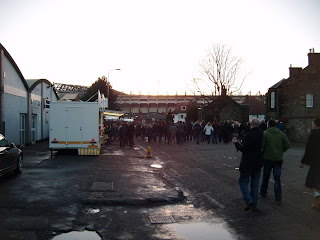 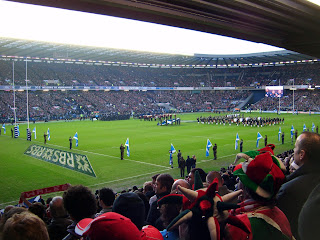 In our seats before kick-off. That does not happen very often when we go to Murrayfield. 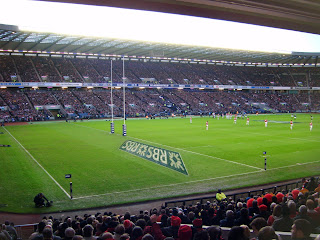 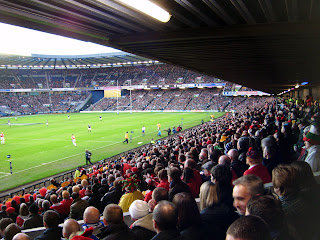 Looking toward the North Stand. You can see some empty seats. 7,000 tickets remained unsold. 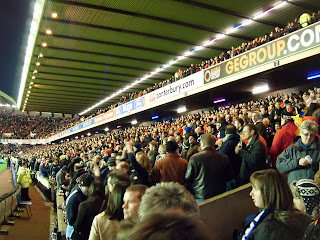 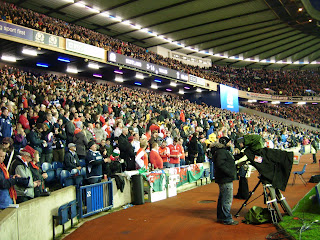 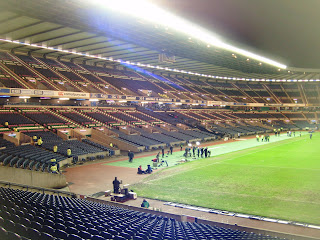 An empty West Stand after the game. 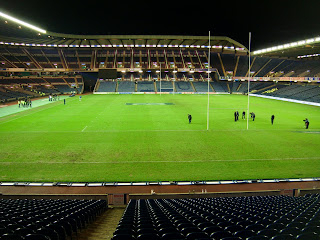 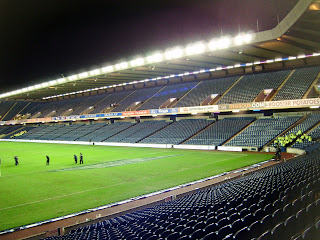