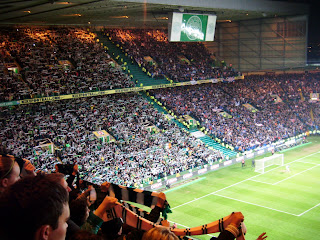 
On Wednesday night I made the short journey from Paisley to the East End of Glasgow for the fifth round Scottish Cup replay between arch rivals Celtic and Rangers. The first game on 6th February ended in a 2-2 draw after Rangers had been up 2-1 at the interval. Celtic were playing with ten men after their goalie Fraser Forster was sent off late in the second half but somehow Scott Brown managed to equalise with 25 minutes left on the clock. His subsequent celebrations in front of Celtic hate-figure El-Hadji Diouf have since been known as 'doing the Broonie.'

Since Celtic and Rangers will also meet in the Co-operative Insurance Cup Final and, as always, four times in the league, there will be seven Old Firm encounters this season. This may have been one of the reasons for tickets for this game going on general sale two weeks ago. Normally it is almost impossible to get tickets for any of these matches through the official channels if you are not a season ticket holder for either of the clubs. Since I had not seen an Old Firm derby at Celtic Park yet I was not going to pass up on the chance to get my hands on one of the coveted briefs. Remarkably however tickets were still available shortly before the game and Celtic even advertised the match on the radio.

I was inside the ground about 30 minutes before kick-off and took my seat amongst the home support. The football on show tonight was disappointing and comparing the players on the park with those I watched in Old Firm clashes when I moved to Scotland ten years ago shows how much standards have dropped in the SPL, although Bert Konterman may still struggle to be in the Rangers starting eleven in 2011...So I will not say much about the football but I do not think that is what these games are about anyway.

It is all about the hype that is created by the supporters and the media before these games and sometime after. And, as we have seen time and time again, even seasoned professionals often cannot handle this hype. Celtic truly dominated the game after Steven Whittaker was sent off after 37 minutes after picking up a second booking for fouling Emilio Izaguirre. Somehow this led to a spat between El-Hadji Diouf and the Celtic bench and it all kicked off again when both teams went to the dressing rooms at half-time.

Only three minutes after the break Mark Wilson scored what turned out to be the only goal of the night and, in true Old Firm style, Wilson's effort smashed off Saša Papac’s head. The Rangers left back had to be stretchered off the park but predictably the Celtic fans sang that they 'just couldn't get enough.' Celtic were unable to score a second goal even though Georgios Samaras hit the post. Madjid Bougherra became the second Rangers player to be sent off in the dying minutes when the Algerian received a second yellow card after a cynical foul on Kris Commons.

After the final whistle and Celtic's quarter final appearance confirmed (which also means Rangers cannot win the domestic treble of course) it really kicked off with Celtic manager Neil Lennon and Rangers assistant coach Ally McCoist squaring up and Diouf being red-carded after picking up a second booking for approaching referee Calum Murray. Bizarrely, despite the sending-off, the Senegalese striker still walked up to the end of the pitch to throw his shirt into the away section.

Despite all the turmoil on the pitch I did not encounter any aggression outside the stadium or on my way to Glasgow Central (I did not see anything untoward after last year's Old Firm at Ibrox either) and I arrived back home just after eleven. The football was dire but the entertainment was top-notch! 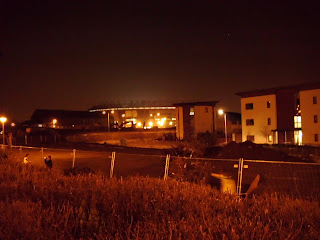 Celtic Park seen from the Gallowgate. 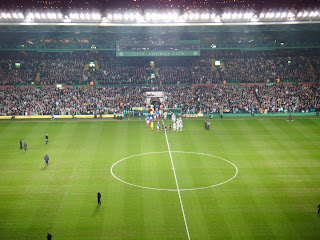 The two teams coming on the pitch. 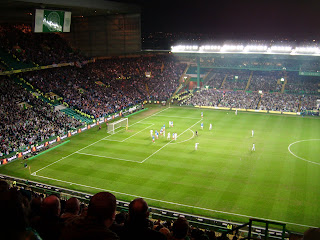 Celtic free-kick in the first half, Rangers fans in the corner. 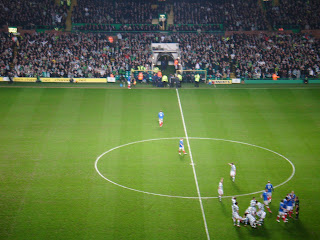 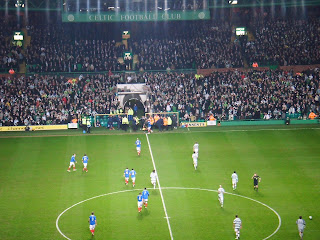 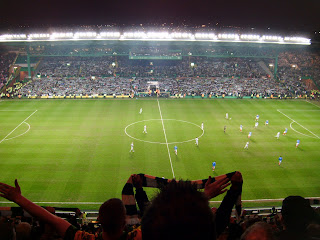 You'll never Walk Alone at the start of the second half. 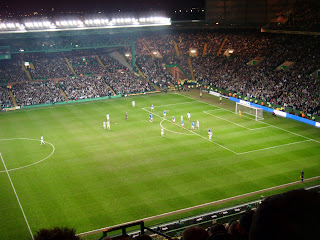 Celtic free-kick in the second half. 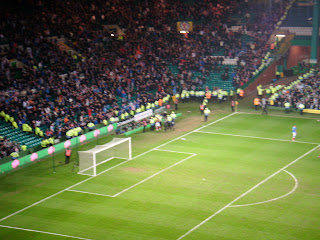 Diouf was red-carded after the final whistle but still stayed on the park and threw his shirt into the away end. 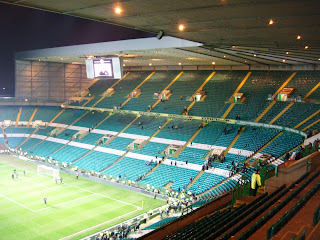 The Jock Stein Stand after the match. 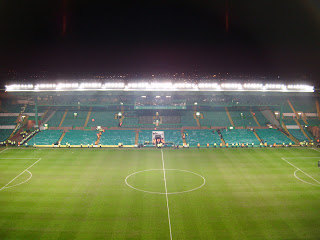 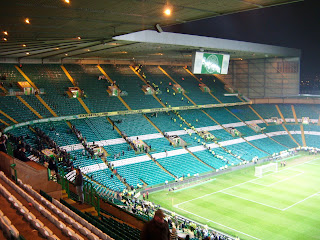