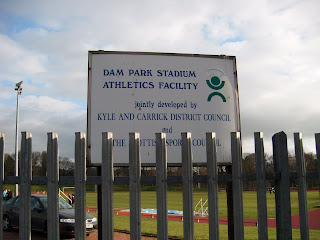 Yesterday I went to Ayr for the Scottish Juniors West Region First Division clash between Whitletts Victoria and Clydebank. This was a vital game for both clubs as both are vying for promotion to the Super League Premier Division and were sitting in the top two spots in the First Division league table before Saturday's match, which was played at Dam Park. Whitletts' traditional home is Voluntary Park but this ground, which is also used for greyhound racing, was closed recently by South Ayrshire council as there were major health and safety concerns. Dam Park is a council-owned athletics venue and spectators are quite far from the pitch but the facilities are better than at many other junior grounds. Clydebank, in their previous incarnation, had played at Dam Park once before. This was for a league cup tie against Ayr United in 1972. Clydebank lost 5-0 almost 40 years ago but they had a much easier ride yesterday.

Tommy Martin missed the chance to put Bankies ahead after only twenty minutes when his kick from the spot went about a yard over the crossbar but when Whitletts' Rikki Harvey was sent off not much later for a dreadful stamp on Martin Clydebank's dominance became too much for Whitletts with goals from Stevie Dymock and Mark Hailstones before the interval and a Gordan Moffat goal two minutes after the break. Craig Main scored for the home side with seven minutes left on the clock, but as the footballing cliché goes, it was all too little, too late. Clydebank are top of the league now although all other rivals for promotion have at least two games in hand. 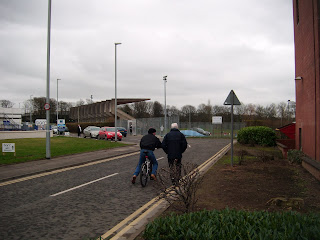 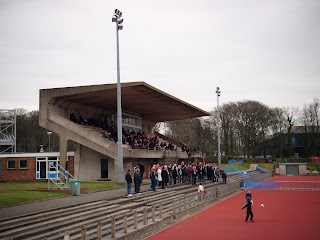 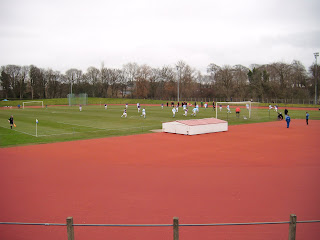 The ground is primarily an athletics venue. 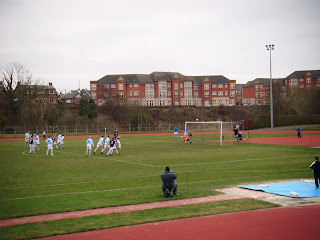 Tommy Martin missed a penalty in the first half. 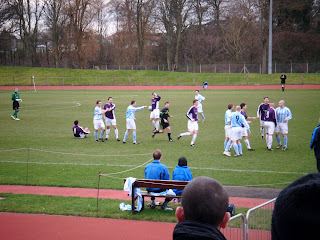 Whitletts' Rikki Harvey was sent off for a stamp on Tommy Martin. 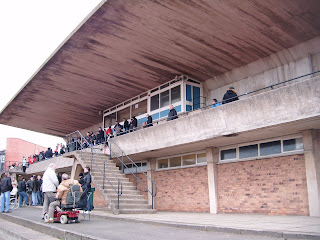 A closer look at the stand at half-time. 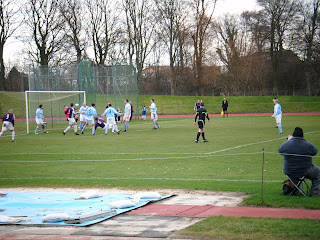 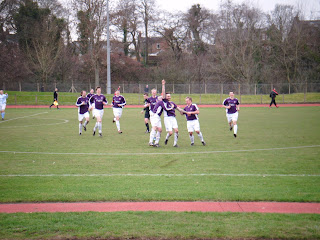 ...but Gordon Moffat scored for Clydebank from the rebound. 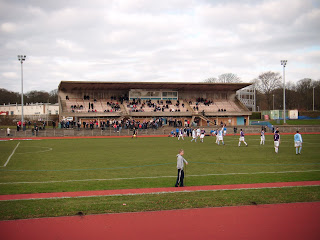 Another look at the stand after the sun had come out late in the second half.