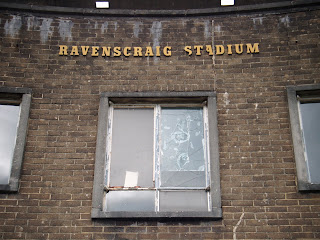 On Saturday I saw my first game at Ravencraig Stadium in Greenock, a ground I have been passing by on my way to work for the last ten years but I had never seen it from inside. Ravenscraig is the home ground of both Greenock Juniors and Port Glasgow Juniors. It is also an athletics stadium with a running track and a large stand which seats about 650 spectators. Unlike Dam Park in Ayr, which I visited two weeks ago, this athletics venue is in a terrible state of disrepair. I just found out however that Ravenscraig is about to undergo a major refurbishment and Saturday's game was Greenock's last at the stadium for the time being. I am glad I was still able to take a few pictures of the 'old' Ravenscraig but the refurbishment, which is set to start this week, looked long overdue.

The game I saw on Saturday was an encounter in the Central District First Division, the third tier in the West Region set-up of the Scottish Juniors. Home team Greenock Juniors were playing Thorniewood United of Uddingston in Lanarkshire. It was a very entertaining six-goal thriller and it was a shame only about 50 people, many of them supporting Thorniewood, turned out to see it. I do not know what kind of numbers Port Glasgow Juniors usually attract in terms of home support, however looking at the distance between Ravenscraig and the town of Port Glasgow it cannot be much more than that either. Despite the small crowd there were still pies and Bovril (but no tea or coffee) on sale during the interval. After the game I headed to Branchton train station again, a ten-minute walk, for the 25-minute train journey back to Paisley. 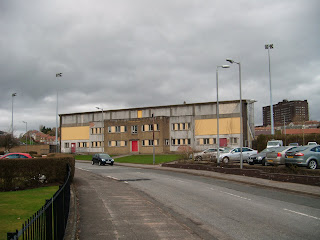 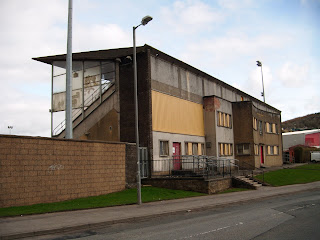 The stand seen from outside. It is in dire need of a bit of TLC... 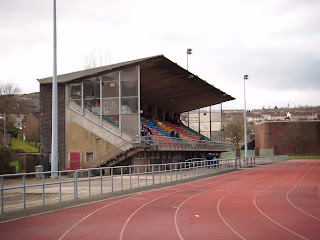 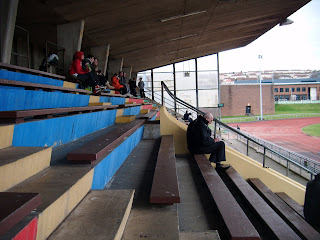 Wooden benches in the stand. 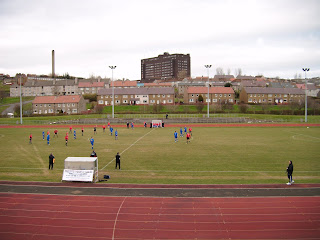 The view from the stand. Small terraces can be seen on the other side. The high-rise building that dominates the Greenock skyline is Inverclyde Royal Hospital. 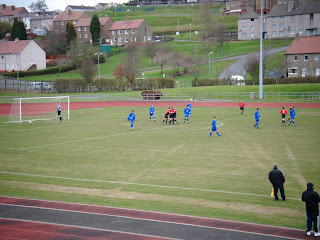 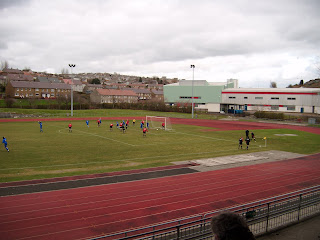 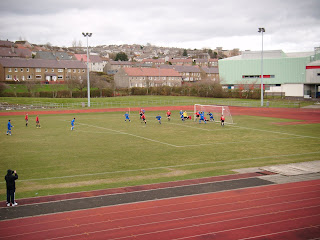 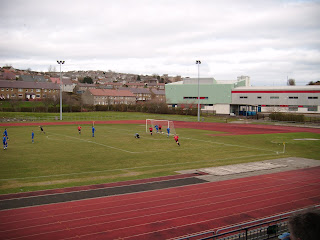 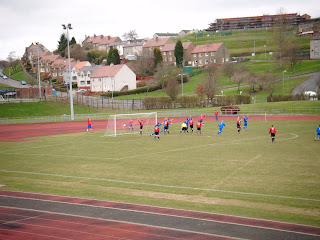 Thorniewood go 3-2 up again thanks to a Chris Lafferty free-kick. 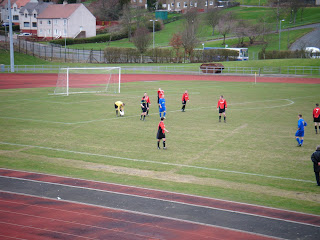 Greenock player manager Stevie Mooney was then sent off after picking up a second booking... 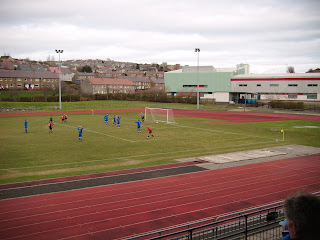