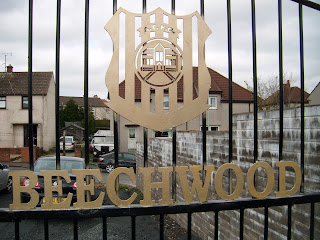 On Saturday I went to Auchinleck, East Ayrshire, for the first leg of one of the Scottish Junior Cup semi-finals. The other semi played was Musselburgh v Dalry but I opted for the match in Ayrshire since I had not been at Beechwood Park and the journey was slightly shorter. To travel from Paisley to Auchinleck by train you have to hop on the train to Glasgow Central and from there catch the train to Carlisle. Auchinleck is the first stop after Kilmarnock and since the Ayrshire village is very small it was a short walk to Beechwood Park.

After I paid my £7 to get inside I quickly realised that the ground was actually segregated and I had somehow ended up in the away end. Since this was the 'boring' end as far as the ground is concerned I quickly walked over to the home end. Most supporters (there were about 2,000 of them) were inside well in time as there seemed to be high expectations from both sets of fans; even the teams kicked off two minutes early.

Beechwood Park is a well looked after junior ground with fairly large uncovered terraces on one side and behind one of the goals (today's away end). There is a small covered terrace behind the other goal. This is where the vocal younger Auchinleck fans congregated (and drank their tonic wine). The large stand on the other side of the ground holds 500 and used to be part of Hamilton Accies' old Douglas Park. Talbot, who play in the West Region's top tier, have won the Junior Cup eight times, which is a record.

A tenth cup final appearance (Talbot were runners-up only once) looms for the Ayrshire club after last Saturday's match. The game was turned on its head after 20 minutes when David Forrest pulled down Auchinleck's David Gillies just outside the box. Referee Barry Cook gave Forrest his marching orders but Talbot did not score from the resulting free-kick. However six minutes later Brian Young put the Ayrshire club 1-0 up. Immediately after the interval David Gillies made it 2-0. Talbot had a few chances to all but book their place in the final but somehow were not able to score a third. It will be a tough ask but Bo'ness are still in with a chance when the two teams meet at Newtown Park for the return leg on Saturday.

After the game I walked back to the railway station and it turned out that even junior football attracts its share of nutters who are not too interested in the football itself. Despite a large police presence in the village I still witnessed a few minor scuffles. 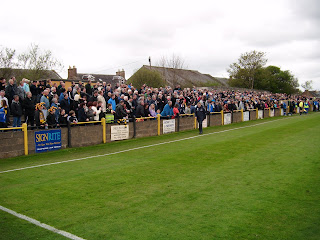 The large terrace opposite the stand was packed. 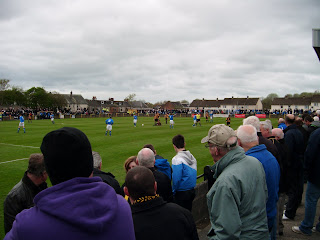 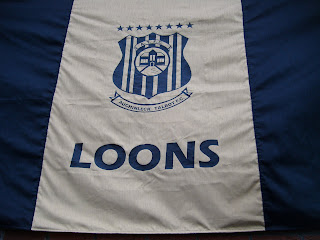 The Loons are a group of fanatical Auchinleck supporters. Note the eight stars above the club crest, which represent the eight Junior Cup wins. 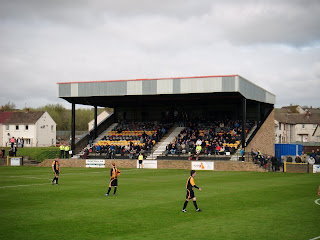 The stand, which was purchased from Hamilton Accies, holds 500. 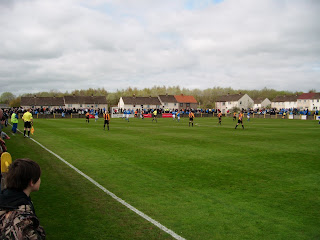 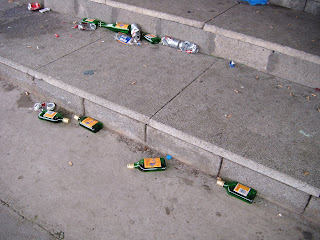 There was a supposedly strict alcohol ban however, as this picture taken in the enclosure shows, this was not enforced at all. 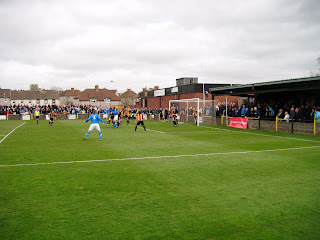 Despite playing with ten men Bo'ness had some chances in the second half. 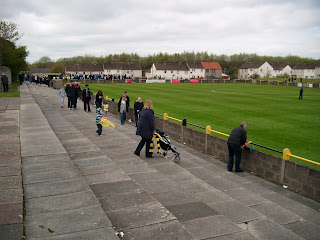 The large terrace after the game. 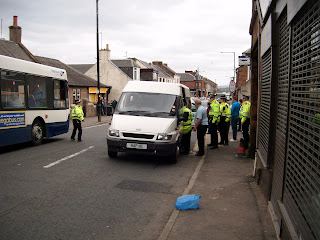 There was a large police presence in the village (population: 3,500) and unfortunately I witnessed a few, undoubtedly drink-fuelled, ugly scenes.