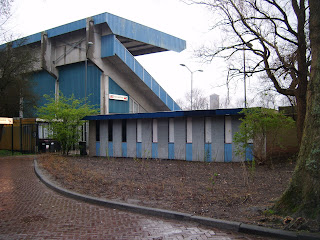 Last weekend I was in the Netherlands again. Apart from seeing my family, my main purpose of this trip was the Willem II v Roda JC game on Saturday. After having arrived at Schiphol Airport my first stop was the city of Haarlem, where I had planned to visit Haarlem-stadion, the former home of HFC Haarlem. Haarlem, founded in 1889, played their final match on 22nd January 2010, a 3-0 defeat by Excelsior at Stadion Woudestein in Rotterdam. Three days later the club were declared bankrupt. The stadium is a twenty-minute walk from Bloemendaal train station. Unfortunately it was absolutely pouring and I arrived at the ground soaking wet. I was delighted the gate to the stadium was open but because of the horrendous weather I did not take as many pictures as I would have done on a sunny day.

Haarlemsche Football Club Haarlem won the Dutch Cup twice, in 1902 and 1912. In 1946, before the introduction of professional football in the Netherlands, they were crowned champions of the Netherlands. After the start of the professional era in the 1950s Haarlem played a rather meaningless part. Their relative heydays were the 1970s and 1980s during which Haarlem played mostly in the Eredivisie, the Dutch top flight, and even managed, with a squad that included a 19-year-old Ruud Gullit, to finish in fourth place in 1982. This meant qualification for the UEFA Cup. Belgian side AA Gent were eliminated in the first round and the opponents in the second round were Spartak Moscow. Although Spartak won both legs, the events on the pitch were, although only in hindsight, overshadowed by what happened in the stands of Spartak's ground, the Lenin Stadium (now Luzhniki Stadium).

The Luzhniki Disaster was a human stampede in which, according to the official statistics, 67 Russian fans were killed. Many estimates of the actual death count are much higher however, some estimate as many as 340 were killed in this stadium disaster. The Soviet authorities tried to keep a lid on the tragedy and it was not until much later, after Gorbachev had become leader of the Soviet Union, that it was talked about openly in the Russian press. Initially the authorities, as was often the case and not just in the Soviet Union, blamed the football fans for the disaster. It was not until much later that a completely different picture was painted. Some Spartak fans were throwing snow balls at policemen who were stationed inside the ground. The large football crowd acted as a relatively secure cloak of anonymity and provided some people with a rare chance to have a bit of fun at the expense of the authorities. The police were not amused however and after the game they closed off several exits to make it easier to find the culprits on their way out. Not surprisingly the police were never held responsible for the tragedy. The stadium manager, who had only been in the job for a couple of months, was made a scapegoat and spent 18 months in a labour camp. The Haarlem players who played in Moscow only found out about the disaster years later.

In 1984 Haarlem ended the season in fourth place once more although this time fourth place did not mean qualification for Europe. In 1990 the Roodbroeken ('Red Shorts') were relegated to the First Division from which they never managed to escape. Even though they even finished bottom of this league a few times, relegation from the Dutch First Division was not possible at the time, a set-up followers of the Scottish Third Division will be familiar with. It was decided that from the 2009/10 season two First Division teams would be relegated to the newly formed Topklasse and Haarlem were 'favourites' to be one of the first two clubs in almost forty years to make the drop from the second tier in Dutch football. Instead they became the first club to disappear from Dutch professional football altogether since both FC Wageningen and VCV Zeeland folded in 1992.

Only months after the demise of the club amateur side Nieuwe Haarlemsche Football Club Haarlem was founded. They merged shortly after with HFC Kennemerland. Haarlem-Kennemerland, who now call Haarlem-stadion their home ground, currently play in the Tweede Klasse, the sixth tier in the Dutch league pyramid. 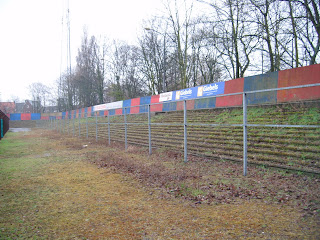 The overgrown terrace in the east end of the ground had already been closed for a while. 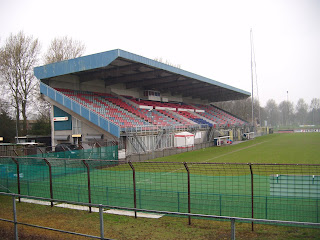 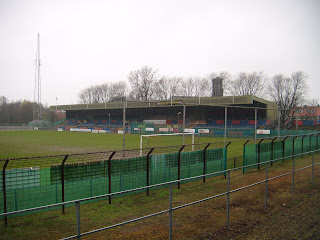 The Noordtribune or North Stand. 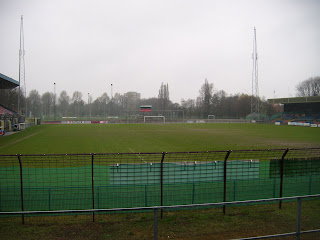 View from the Oosttribune or East Terrace. The Westtribune was demolished only a few months ago. 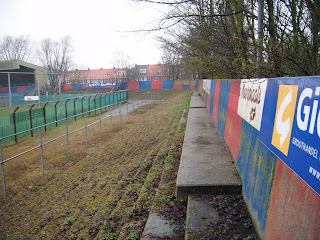