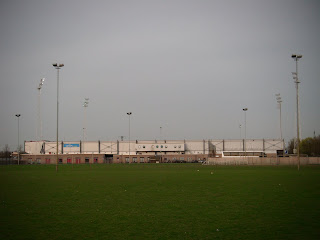 Last weekend I was in the Netherlands for a short football trip. The 'main event' was going to be Willem II v Roda JC (report to follow soon!) on the Saturday but I had decided to also see a match in the Jupiler League, the second tier in Dutch football. The Jupiler League teams all play their games on Friday nights. I usually stay at my parents' in the town of Heerlen when I am over and this somewhat limits the teams I can see as I usually travel by train and Heerlen is tucked away in a southeastern corner of the Netherlands, near the Belgian and German borders. This means I cannot go to grounds that are too far away because I would not be able to catch a train back, which basically rules out clubs like Veendam, Go Ahead Eagles, Cambuur and AGOVV. Helmond, near Eindhoven, is one of the towns with a representative in the Jupiler League that are near enough to travel back and forth to on a Friday night.

A return ticket from Heerlen to Helmond cost me €32, which I thought was quite dear for a journey roughly the equivalent of Glasgow-Edinburgh. After an hour I arrived at Eindhoven station where I had to change and after a 10-minute journey I got off at Helmond. The walk to the stadium took me about 25 minutes. Helmond Sport's home ground used to be called 'De Braak' but was renamed 'Lavans Stadion' last year for sponsorship reasons. Upon arrival at the ground I took a few pictures and bought my ticket for the North Stand, which only set me back €9.50. There was a healthy crowd of well over 3,000 inside the 4,100-capacity stadium but the atmosphere was quite subdued as is the norm in this league. Nevertheless the lads on the North Stand were putting in a good effort now and then.

Helmond Sport are one of these quintessential Jupiler League teams. I could not remember them ever playing in the Eredivisie but, according to Wikipedia, they had a short spell in the top tier during the 1982/83 and 1983/84 seasons. Helmond have been reasonably successful so far this season, sitting in third place, and a place in the promotion play-offs looks as good as certain. Tonight's opponents Emmen have never played at the highest level. They only started playing professional football in 1985 but were close to promotion a few times in the late nineties and early noughties. The last few seasons, including the present one, have been rather disappointing for the Emmen fans.

Presumably the Helmond fans had expected a win tonight but it was not to be. Eldridge Rojer scored the opening goal for Emmen in the sixteenth minute. Marc Höcher equalised fifteen minutes later and the half-time score of 1-1 seemed fair. In the second half Helmond upped the ante but were unable to find the net until Ilja van Leerdam scored 2-1 minutes before time. Since Emmen player Jeffrey de Visscher had received a second booking five minutes previously the three points seemed to be in the bag for Helmond. Emmen were not giving up however and Randy Wolters stunned Helmond four minutes before time with the equaliser. I have to say goalie Wouter van der Steen, who replaced the injured Robert van Westerop, looked suspect for both goals.

After an entertaining game I made my way back to the train station and was back at my parents' before midnight. 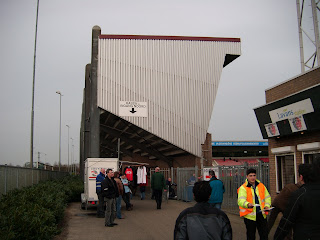 The Noordtribune or North Stand was built in 2000. 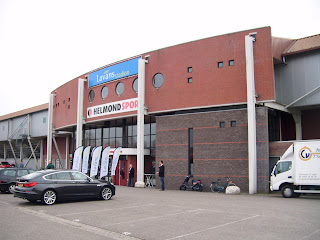 The Oosttribune or East Stand. 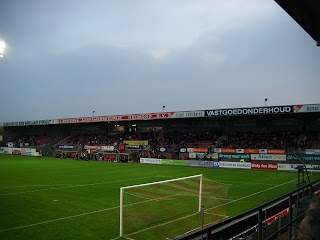 The Westtribune or West Stand. 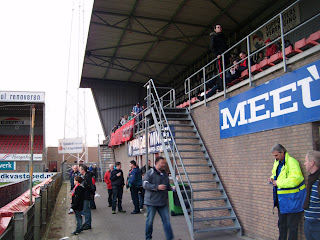 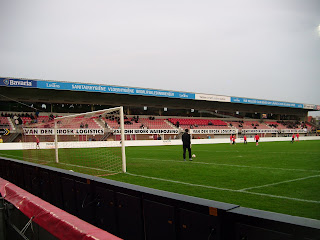 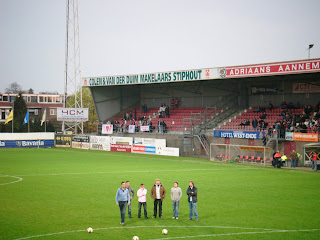 The Emmen fans can be seen in the faraway corner. The lads on the pitch were taking part in some competition where they had to shoot a crate off the crossbar in two attempts. I think three of them actually managed to do so, I have no idea what the prize was. 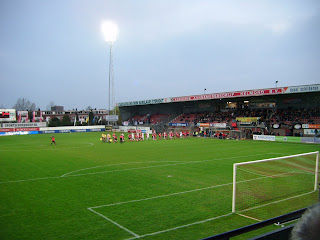 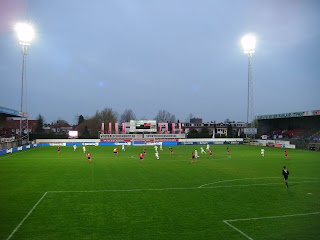 There is no stand in the southern end of the ground. There used to be terraces but these were demolished in the 1990s. 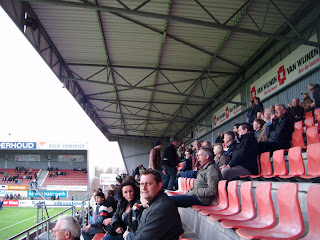 The Noordtribune seen from my seat. 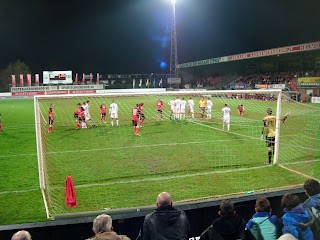 This injury-time free-kick did not go in and the night ended disappointingly for Helmond.